“The spectacle is not a collection of images; rather it is a social relationship between people that is mediated by images.”
– Guy Debord, The Society of the Spectacle

The political climate in Pakistan has always been turbulent – religion, terrorism, the freedom of media and a tug of war between extreme societal values are the norms by which people live. Being a liberal woman, and a mother of two, the dilemma of finding the ‘right’ place in society is intended in my play with attire in the works. I have deliberately taken renowned paintings from the western world and inserted myself as the protagonist, together with my socio-cultural environment asa compositional element embedded with ironical twists and aesthetic inversions.

I like to investigate how relationships to identity are culturally conditioned and subject to the changes brought on by globalisation. Along with this preliminary conceptual framework, I try to explore ideas of the ‘self’ and the ‘other’. Hence, the focus of my academic research which is conducted alongside the production process is concentrated on cosmopolitan female attires in contemporary Pakistani print media. For me, this is reflective of changing gender ideologies of the upper middle class youth of urban Pakistan – one that I prefer to bring into focus in our rapidly changing civil circumstances 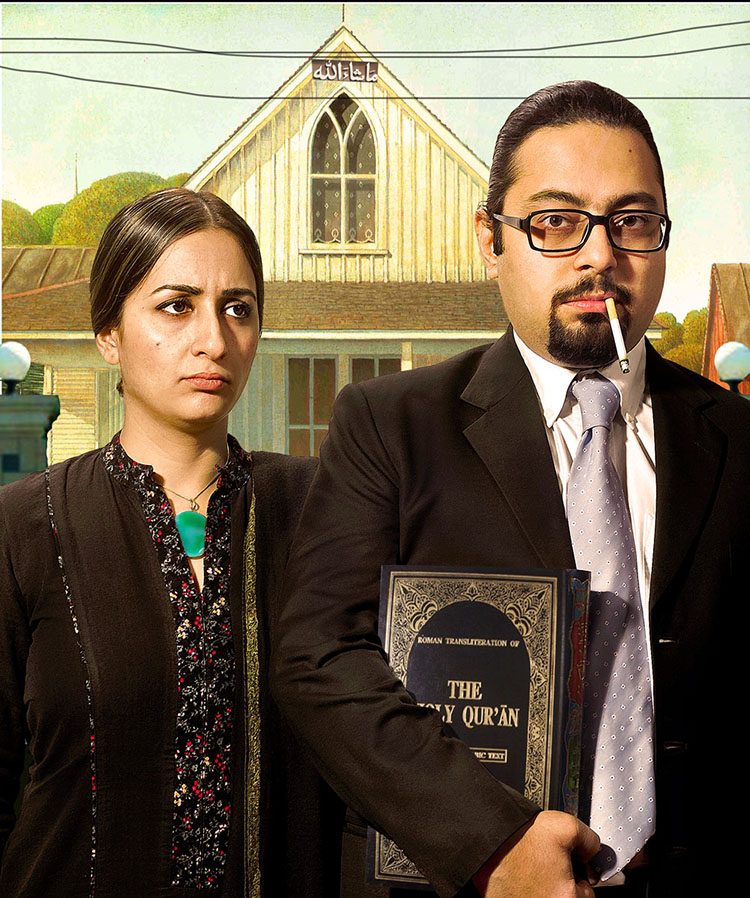 “The Reluctant Fundamentalist” from the series Glocal, Lahore, 2012 Digital 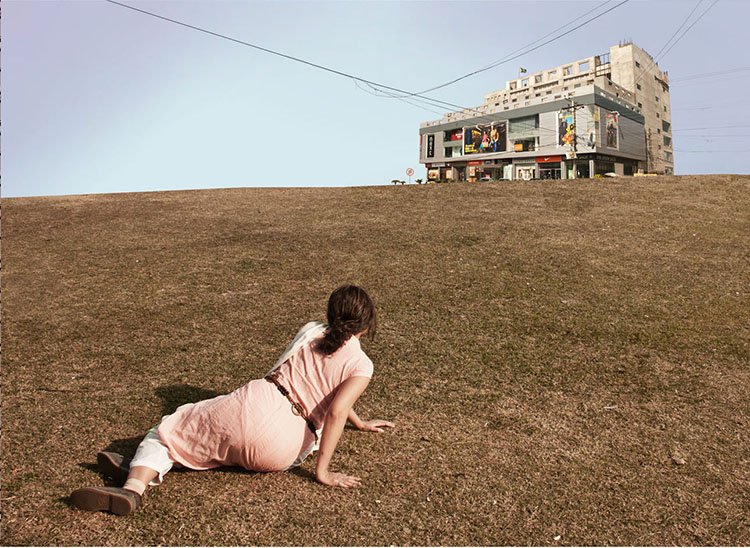 “The God of Small Things” from the series Glocal, Lahore, 2012 Digital 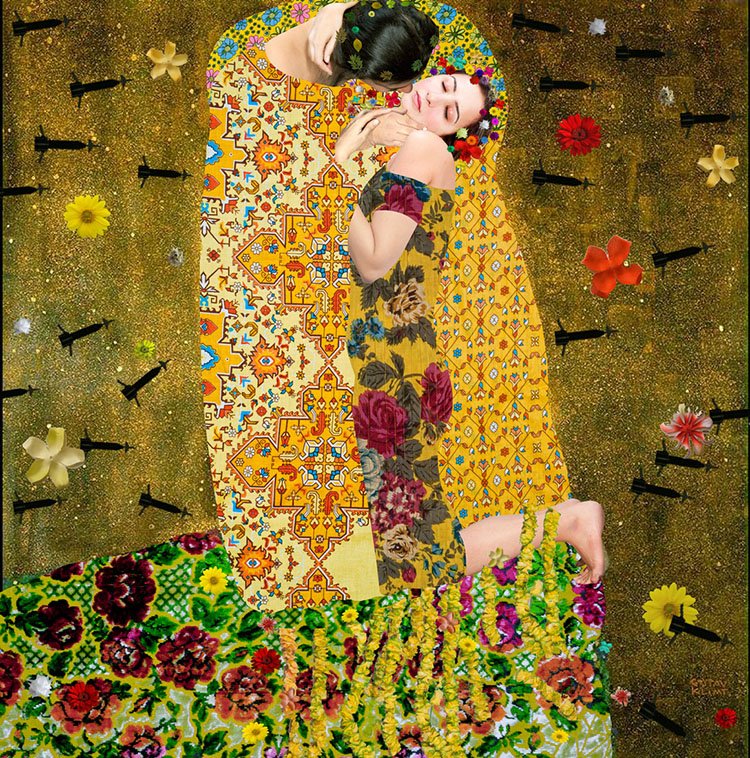 “A Case of Exploding Mangoes” from the series Glocal, Lahore, 2012 Digital 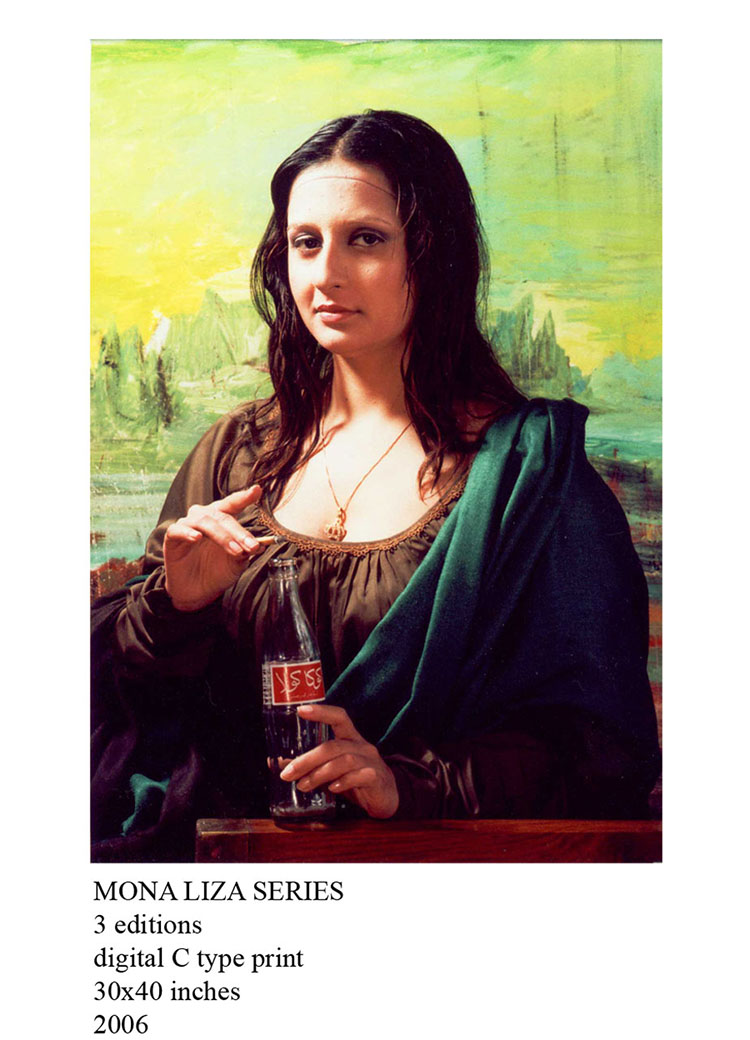 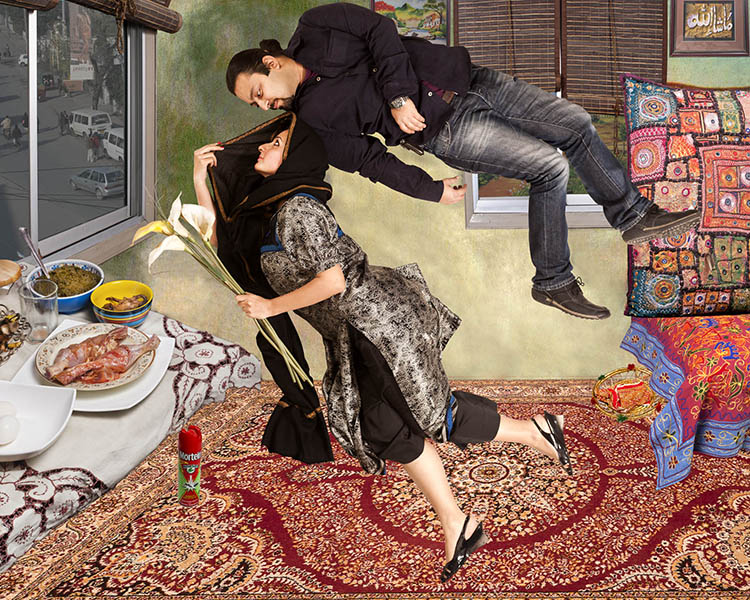 “Unveiling the Visible” from the series Glocal, Lahore, 2012 Digital

Hammad’s work revisits questions of origins in a globalised world. It plays with our familiarity with iconic European and American paintings, reminding us that we approach these images as if we already know what we will see. The work itself, however, flies in the face of our knowledge about these famous paintings, not because they have been reworked and their forms have been filled with new content in a photographic medium, but because the new content and the new medium tells us that our presumed knowledge was merely a surface knowledge limned in the bright kitschy glow that attends all endlessly reproduced and therefore iconic pieces of art. Such over familiarity is a barrier to knowledge since it results in nothing more than repeating the familiar, are confirmation of the already seen.

Iconic images like Leonardo ad Vinci’s Mona Lisa, Andrew Wyeth’s Christina’s World, and Gustav Klimt’s The Kiss have long become unmoored from the surface of their canvases, become simulacra. Hammad responds to this state of affairs not by countering the familiar with the modernist solution of defamiliarisation, but by pressing the logic of familiarity to its logical extreme. She embraces the kitsch element precipitated by the endless circulation of these images and in her hands kitsch becomes parody: Mona Lisa and her cryptic smile can finally be attributed to the taste of Coca-Cola made for the Muslim market; “Christina” looks out toward a banal urban shopping and cinema complex transported to the iconic fields where she perpetually roves; American Gothic in the Pakistani context replaces the pitchfork of the original referent with the Quran. The layering of the visual references is further layered, in Hammad’s work, with the titles that invoke well known postcolonial novels: The God of Small Things, A Case of Exploding Mangoes and The Reluctant Fundamentalist. And here we sense how Hammad’s work underscores its parodic gestures with deadly seriousness. A Case of Exploding Mangoes quite vividly anticipates an impending explosion with images of drones that surround the couple along with the flowers and textile prints. The God of Small Things shows “Christina” in her world, and here she seeks to traverse the field in the hopes of visiting a mall and a cinema. A yearning for consumer goods, perpetually placed just at the horizon, motivates her struggle across the field; this is desire that is simultaneously small, banal, and yet perhaps impossible. The Reluctant Fundamentalist, by replacing the pitchfork with the Quran, holds open the possibility that the Holy Book might be a productive and useful tool, or it might be a weapon – the montage, like the novel it references, holds both possibilities in abeyance.

Of the works included here, Unveiling the Visible appears, on the surface, to be a piece from a different project. But Unveiling the Visible references the title of the well-known book, written by Salima Hashmi, about contemporary Pakistani women artists. It depicts the artist surrounded by domesticity, and she and her male companion float like one among other elements in this montage of textures, textile patterns, and middle-class accoutrements. The stark realism of the scene outside the window, rendered in pale grey, contrasts with vibrant interior that takes upmost of our view. As a counterpoint to second wave western feminism that decries the domestic space as a kind of prison for women, Hammad’s piece suggests that this space might also be a refuge. Moreover, in this highly ornamented space there is often no difference between the ornament and the essential thing. Consider the cuts of meat and the head scarf – they are both ornaments of middle class living and also food and clothing, and if the shalwar shows more leg than shalwars normally do, then we must remember that legs can be thought of as risqué ornaments only in the light of the stark grey public space we see outside the window. That exterior space remains the key to this entire composition. But here in the interior, unveiling refers to the dressing up of surfaces; the visible itself is but a canvas for the female artist. The banal grey exterior we see through the window remains a space perpetually to be negotiated, unadorned and, in a critical sense, unveiled. 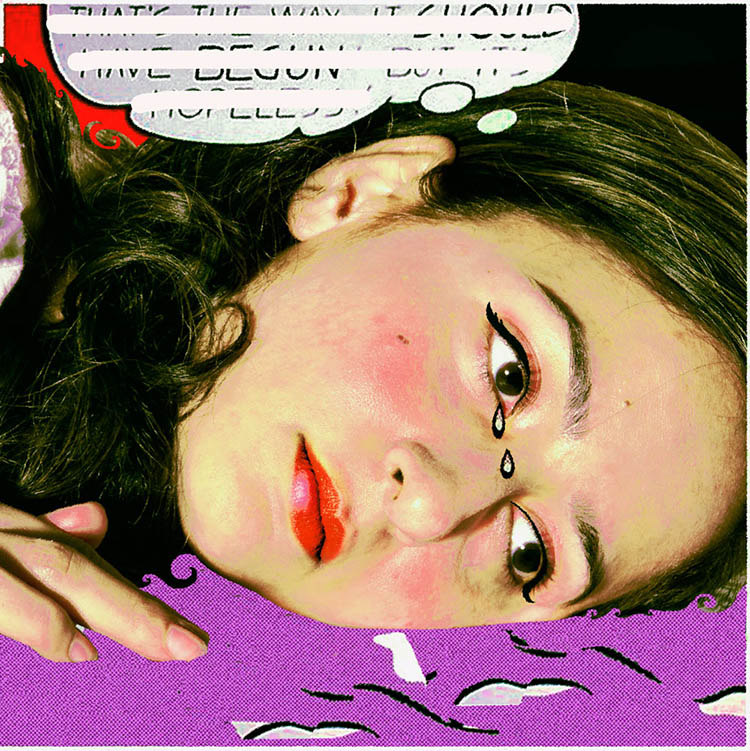 “I Dream of Microwaves” from the series Glocal Lahore, 2012 Digital