Swat is located in northwest Pakistan, within a mountainous belt called Khyber Pakhtunkhwa, bordering Afghanistan. Pakhtuns, a traditionally tribal people who migrated from Afghanistan in the early 13th century, comprise a majority of the population here. Prior to their settlement, Swat had already played host to a rich diversity of other civilizations. In 327 BC, Alexander the Great invaded the region on his grand conquest for the East, introducing Greek culture to the valley. Some years later, Buddhism took root under the influence of the Mauryan Empire.

From 870 AD, Buddhism declined and a brief period of Hinduism dominated the valley, but it was swept away by the Ghaznavids around 1000 AD, who introduced Islam into the valley. Soon after, Afghan tribesmen and Sufi men flocked to Swat to settle, and most of its inhabitants converted to Islam, which remains the dominant faith today. The name ‘Swat’ was derived from Suvastu, the Sanskrit name given by early Aryans after its majestic river, meaning ‘good dwelling place’.

Civilization flourished along both sides of the 250-kilometre glacier-fed river with summer pastures, rolling hills, and azure skies conjuring a picture of paradise on earth. Unfortunately, Swat’s fortunes took a drastic turn in 2002. The Taliban took root and eventually achieved complete dominion in February 2009. The world watched as militants forced men to grow beards, closed down girls’ schools, and hung headless corpses of the ‘infidels’ in town squares. The town became synonymous with terror and religious fanaticism, but in May 2009, the Pakistan army decided to take decisive action. A short but bloody battle ensued, and more than two million people were forced to flee the conflict, in the largest exodus in Pakistan since Partition in 1947. The Pakistan army claimed victory in August 2009 after retaking major towns from the militants. Eager to rebuild their paradise, the Swatis swiftly returned to their war ravaged homes. Less than a year later, they were once again forced to flee –this time, a massive flood had struck the valley. The deluge displaced thousands of inhabitants, and decimated entire villages. What Man could not destroy, Nature obliterated, and the destruction of paradise was complete.

It was against this backdrop that I began my search for paradise in Swat. I started photographing people from the time that they were forced into exile due to the conflict in 2009. I continued shooting over the next four years in a quest to find traces of paradise in the existing valley.

Instructions for Photosynthesis in Paradise
Text by Shuddhabrata Sengupta

“Looking heavenwards for heaven is to look in the wrong direction.“
– Kabir

The source of all light is not of this earth, it comes, even when it comes from a mirror, a battery, glancing off a sliver of glass or water, eventually, from the continuing explosion of the sun. Every photograph is indebted to the sky and to the laws of thermodynamics.

And then there is that ancient injunction –“be your own light”. Every photographer must be their own.

And so the task remains of balancing two kinds of light, the one which illuminates the photographer’s vision and the one that comes from the sky. It is difficult to do this anywhere, but especially so in paradise, where light is a form of nourishment, as well as a kind of punishment.

How to make pictures that are not fattened and made heavy by eating too much light ?
One needs a different, photosynthetic kind of metabolism to digest so much light and not be poisoned by it.
When in heaven, you do not look for heaven. When bathed by light, read the dark. Be your own light on the high passes, like the man carved on the mountain said, but try and cast no shadow. 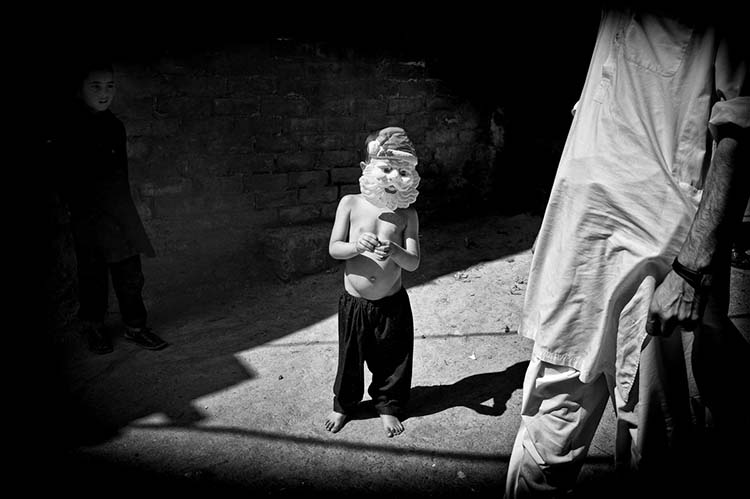 Ataulla, 3, poses as Santa Claus while his friend Sanaulla, 7, poses as a gorilla, oblivious of religious or cultural differences. Saidu Sharif, Swat, Pakistan. 2011/06/04. 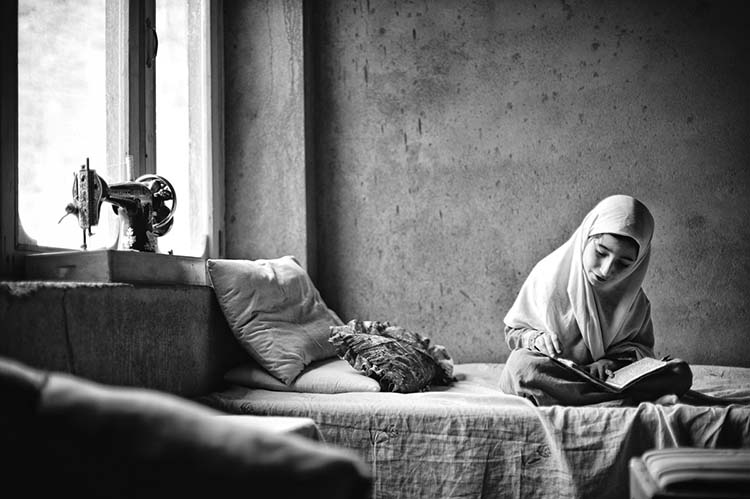 Hamala, 8, recites the Koran by memorising the sounds. Her mother teaches her the Koran. Bahrain, Swat, Pakistan. 2011/05/26. 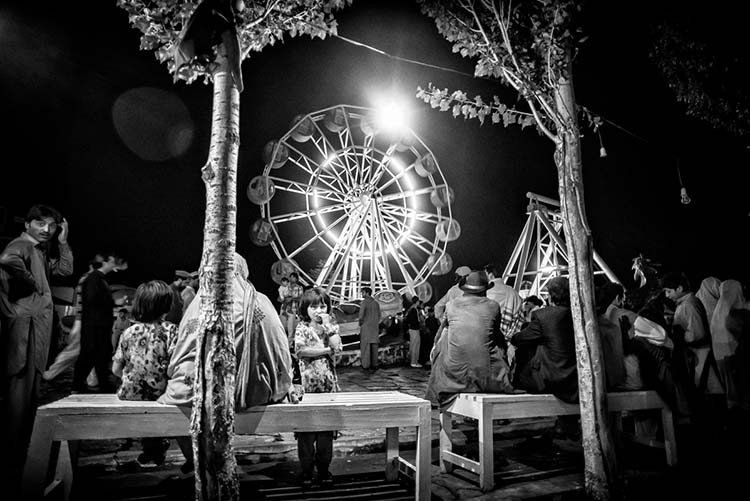 A Muslim man prostrates at the ruins of Bilal Masjid, popularly known as the “Rock Mosque”, during evening prayer time. The 2010 flood washed away everything except for its foundation. Even though the building was destroyed, faithfuls continue to return to the same place to worship everyday. Behrain, Swat. 2010/09/24. 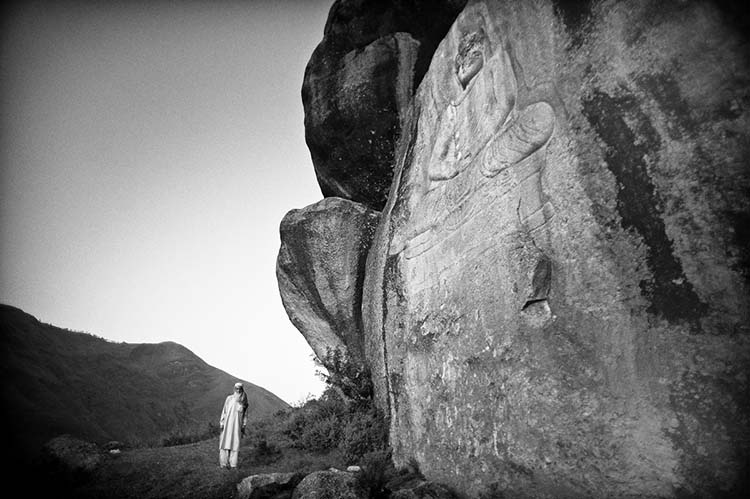 Tooti Gul, 60, who lives in a hut perched on a rock below the Buddha carving of Jahanabad. “At about 3am, the militants came to our house and snatched our mobiles from us and warned us not to climb up there. I asked them ‘Why are you doing this? The Buddha statue is stuck to the wall and won’t harm you’ and they replied ‘It’s none of your business.'” Then we heard the sound of driling and then an explosion. By the time we had the Fajar prayer, they were finished.”
Mingora, Swat Valley, Pakistan. 2010/09/19. 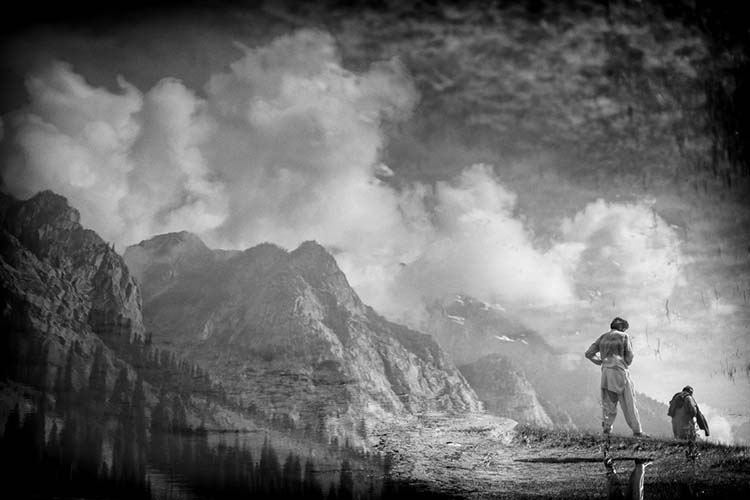 Lake Mahodand, or Fish Lake, which once lay in the secret embrace of the upper valleys, has always been known to the Swatis as a place of breathtaking natural beauty and an abundance of fish. But with the opening of the vehicular road in 2000, the lake has been reduced a natural theme park for pleasure-seeking tourists, looking for a piece of paradise in Swat. 2013/08/01. 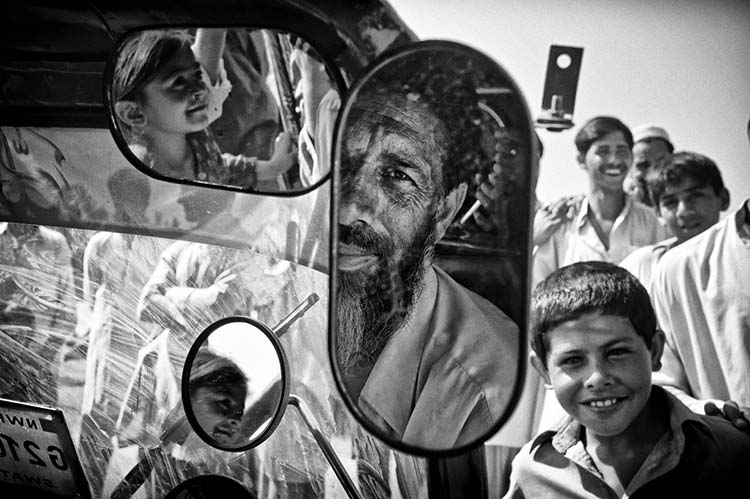 Sher Zaman, 50, squeezed 10 people into his LPG-powered auto-rickshaw, built to carry 3 passengers, to escape the conflict in Swat valley. More than two million people fled in tractors, cattle trucks, auto-rickshaws, and whatever transport means they could find, as mortar shells pummeled their paradise. 2009/05/20 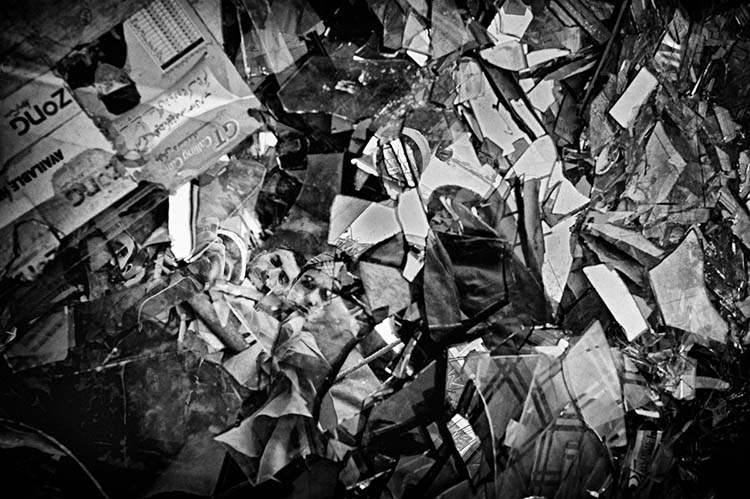 Onlookers gathered to inspect the remnants of vehicular bombings in the busy Qissa Khwani bazaar in Peshawar, which killed at least 12 people and injured more than 100. As the Pakistani military intensified its offensive against Taliban militants in Swat Valley, a string of bombings and suicide attacks have hit cities throughout Pakistan. 2009/05/29. 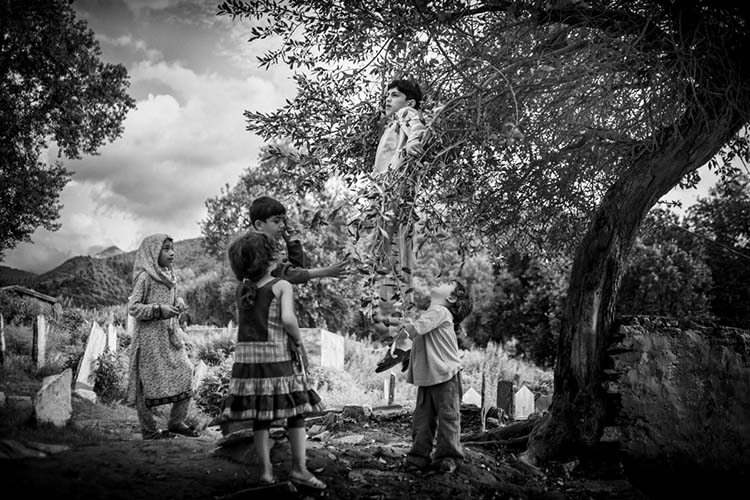 Children pick olives from the trees in a cemetery. Swatis used to believe that olive trees were sacred and preferred to bury their dead around these trees.
Mingora, Swat. Pakistan. 2013/08/14. 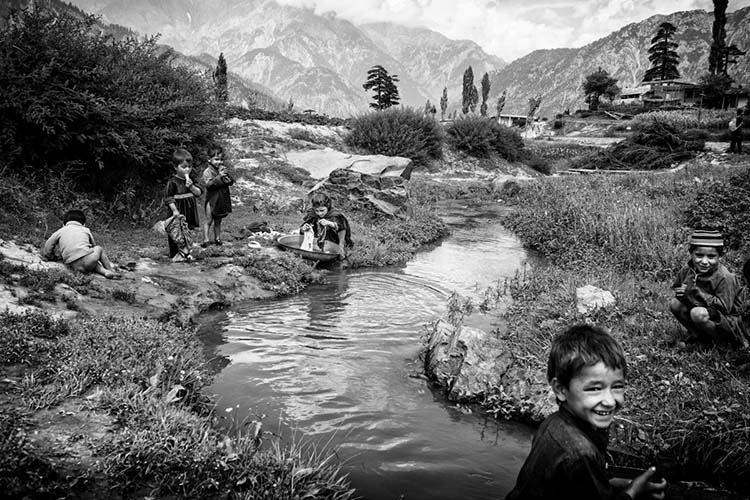 Children play in a stream in Boyoun village, perched more than a thousand feet above the tourist hub of Kalam town. Away from the main thorough fare, Boyoun is one of the last vestiges of Swat untouched by conflict and modernity, where children still play traditional games like “gulidanda” instead of “Army versus Taliban”. 2013/08/11.