On my first trip to Pakistan in 2009, I was inspired by the buses and their windows which I think represent the real and fanciful life of the people in Pakistan regardless of the politics. I started this project in 2009 and finished it in 2011.

250,000 or so decorated commercial vehicles, traversing the 270,000 kilometres of road in Pakistan and viewed by most of its population of 180 million, may be considered the country’s most well-known art fora. Transport decoration is an industry not unlike the traditional karkhana, with its many workshops attracting skilled artisans from metal workers to painters, calligraphers, poets, electricians, carvers and woodworkers. From uncertain beginnings in the mid-50s, when the mural painters of the palaces of Kuchh Bhuj, or sign writers of the Rajdays adapted their skills to transport, vehicle decoration has grown into a lavish spectacle of flashing lights, intricate florescent collages, stainless steel repoussé and brightly painted fantasyscapes. The earlier Bedfords (affectionately known as Rockets) and now the long bodied Japanese makes, challenged the design to evolve.

No expense is spared by the proud owners, which is remarkable because unlike mainstream art, the decorated trucks are not preserved as precious investments, but are exposed to the elements and will be redecorated in a few years. Neither is there any economic benefit – a more decorated vehicle will not be the factor in the hiring process. Transport as ‘empowerment’ took on new meaning for the rural owners of truck fleets during Pakistan’s economic boom of the 60s.

Decorating was and is an essential part of honouring good fortune, showing love and respect, whether the henna on the hands of a bride or the lavish adornment of a Sufi shrine. Mannat cloths, a shoe hidden in the radiator and the all-watching protective eyes are some of the clues behind the deeply superstitious motivations for such decoration. It is possible to contextualise the aesthetic within the tradition of Rajasthani miniature painting as well as religious or aulic architecture,with much of the symbolism coming from poetry and folk or religious texts.

Distinct regional styles have evolved with centres in Karachi, Peshawar, Pindi and Dera Ghazi Khan. Since the 70s privately owned buses and vans are also decorated even more lavishly, primarily with repoussé, florescent sticker designs (Chamak Patti) and flashing lights. The W-11 route of Karachi is the best known for its excessive decoration. In recent years rickshaws have also exchanged the more restrained stitched rexine designs for bus-like decorative devices. Behind this extravaganza lies a darker subtext of longing, anxiety or dark commentary. This can be seen in the choice of images from small cameos to large portraits on the back panels that include film stars, singers, religious symbols, orpolitical martyrs. More overt expressions lie in the poetic phrases or verses that are an essential part of all vehicle decoration.

All images from the series Sticker
Karachi, 2009-2011
Digital/Mixed media 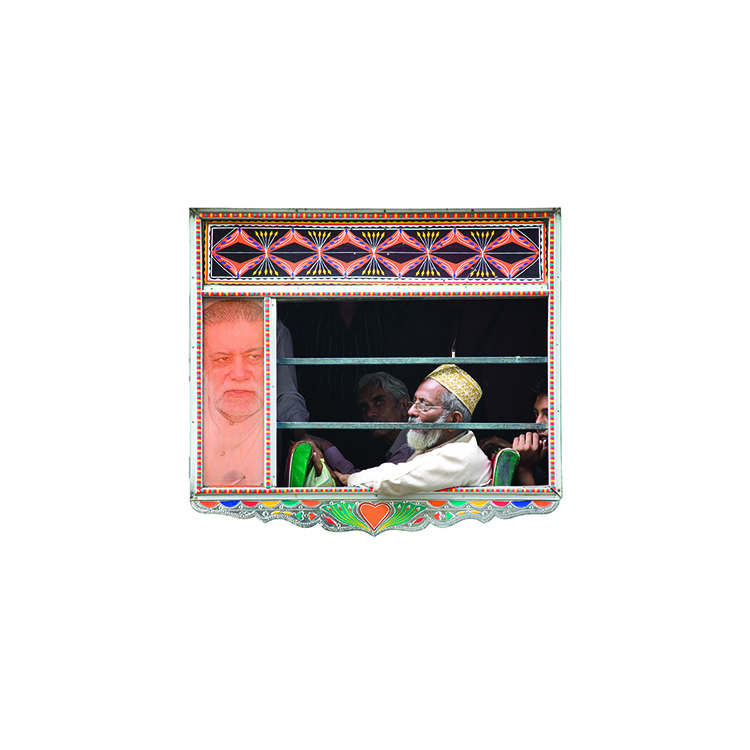 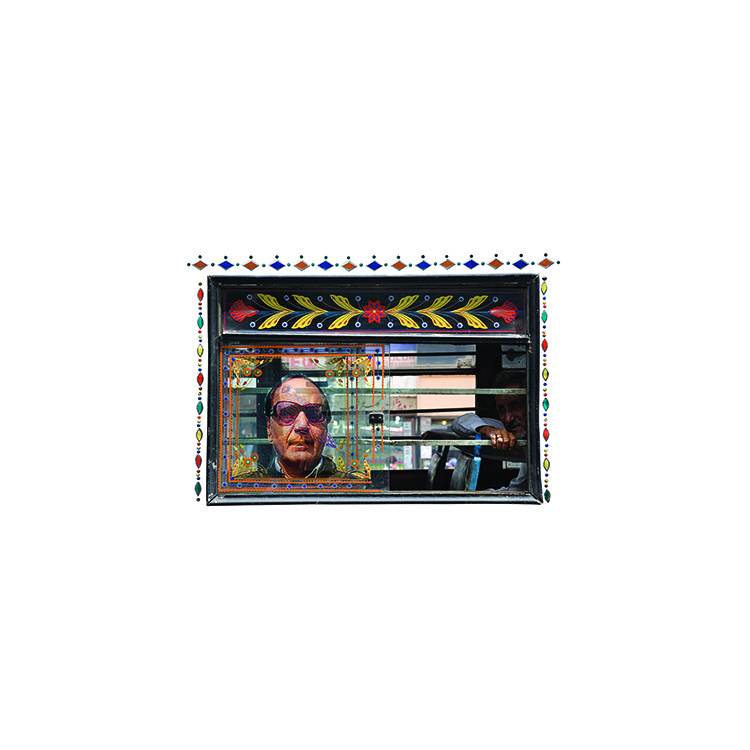 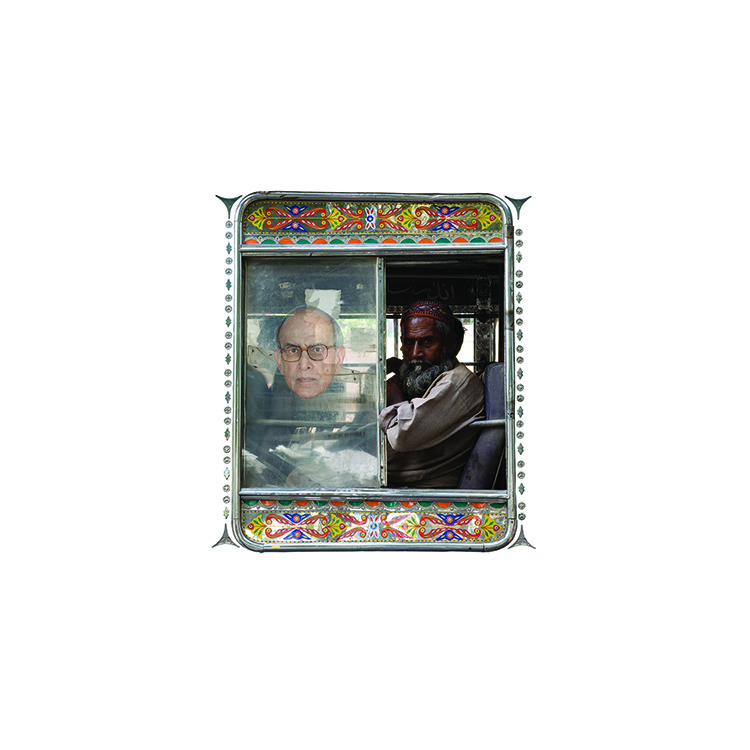 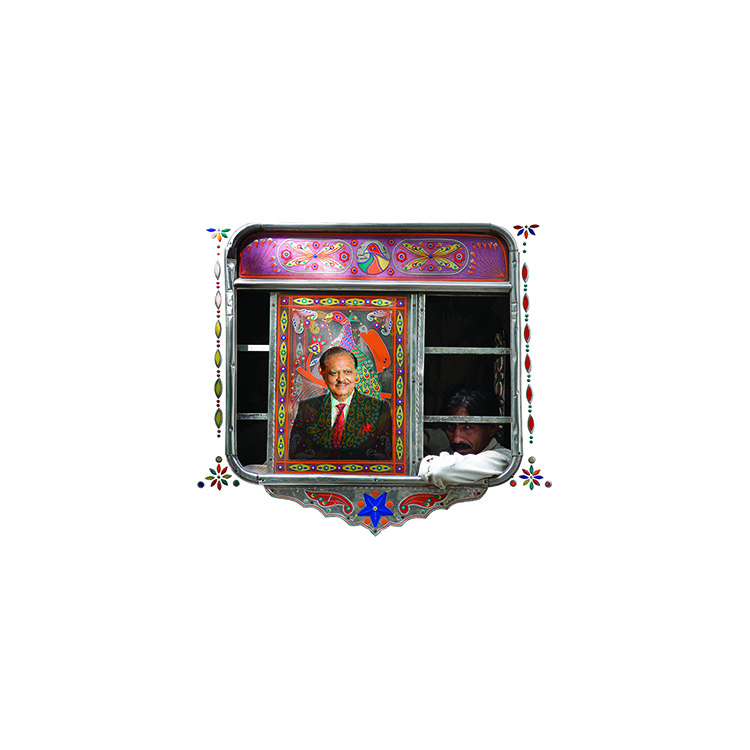 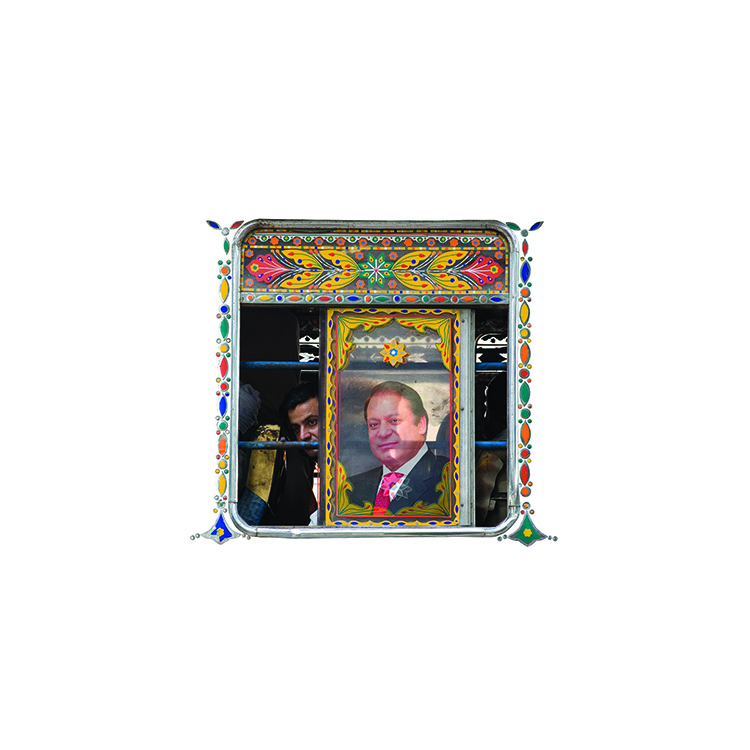 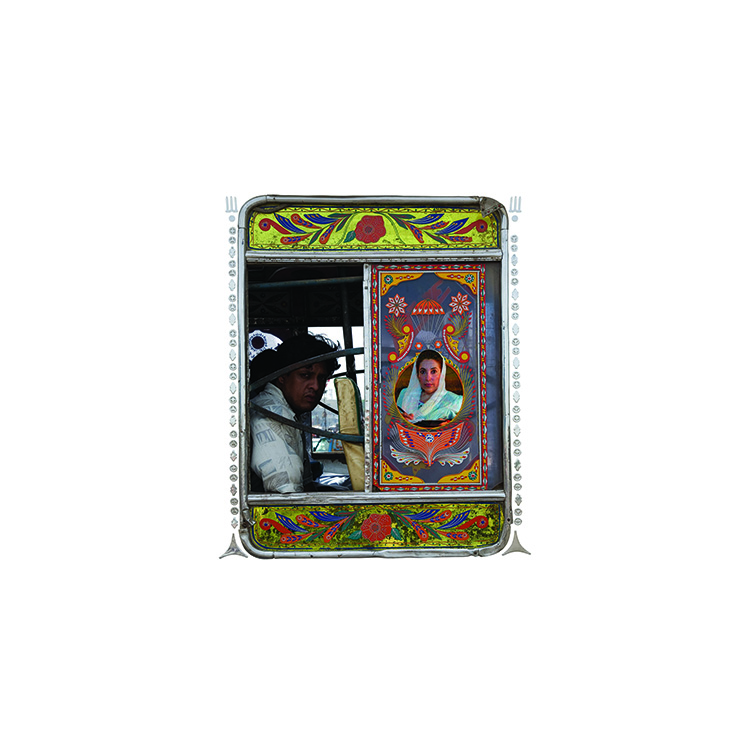 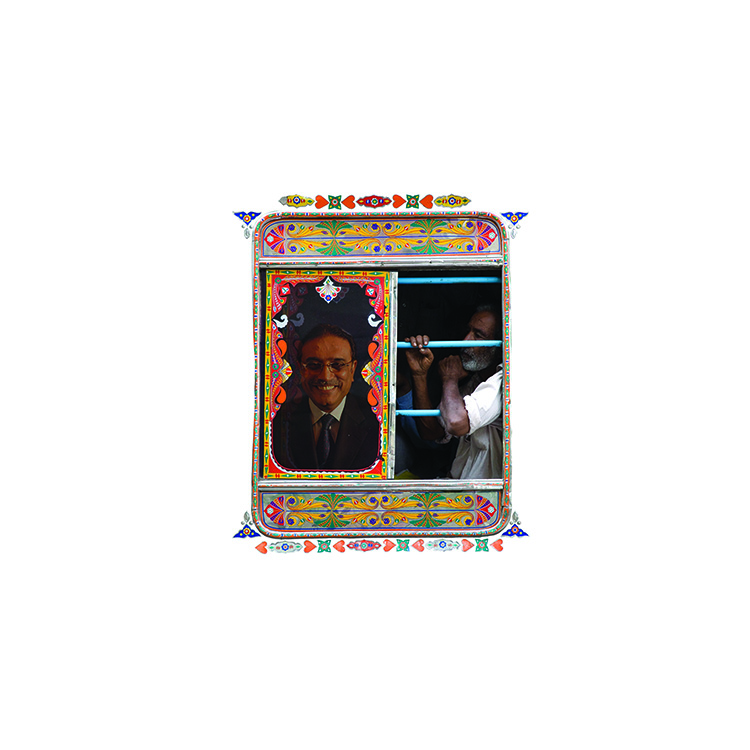 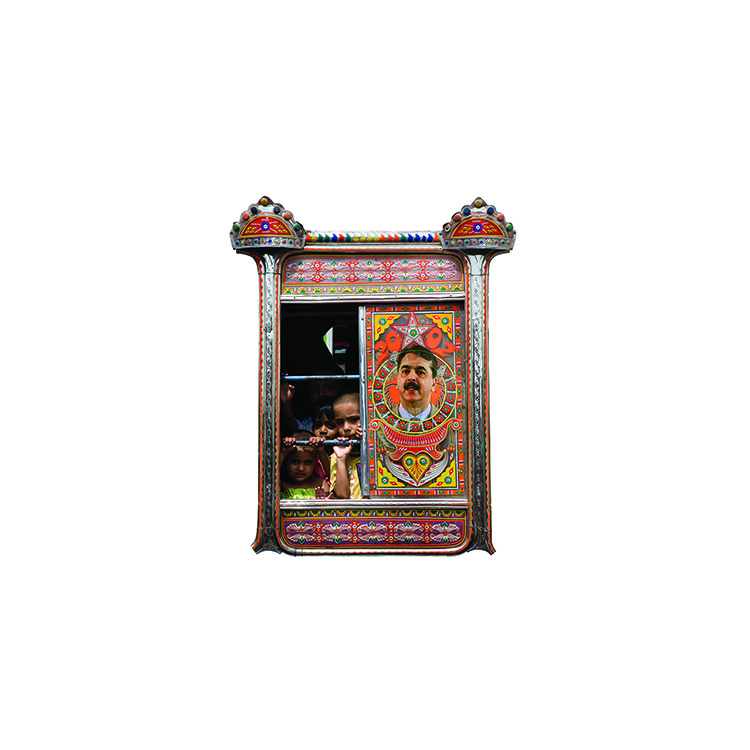 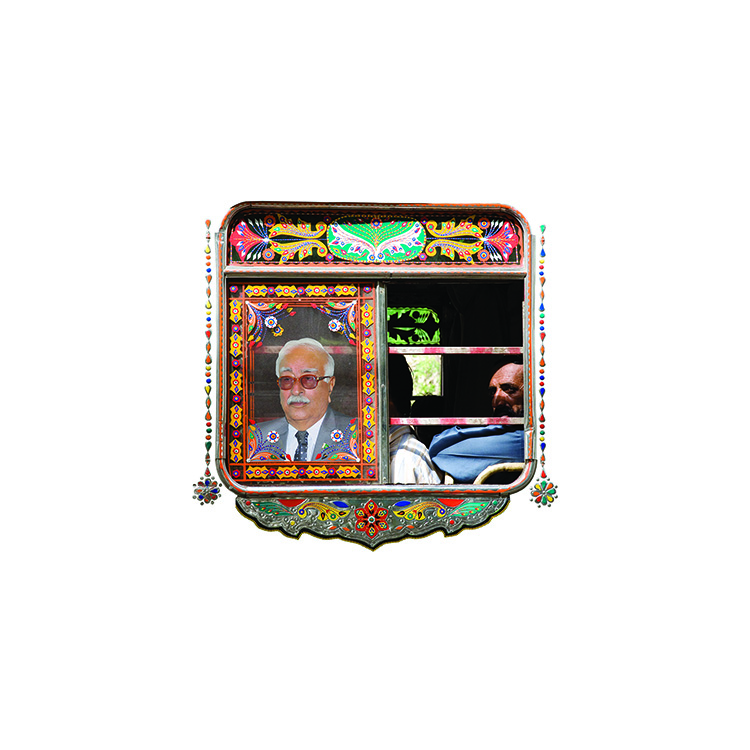 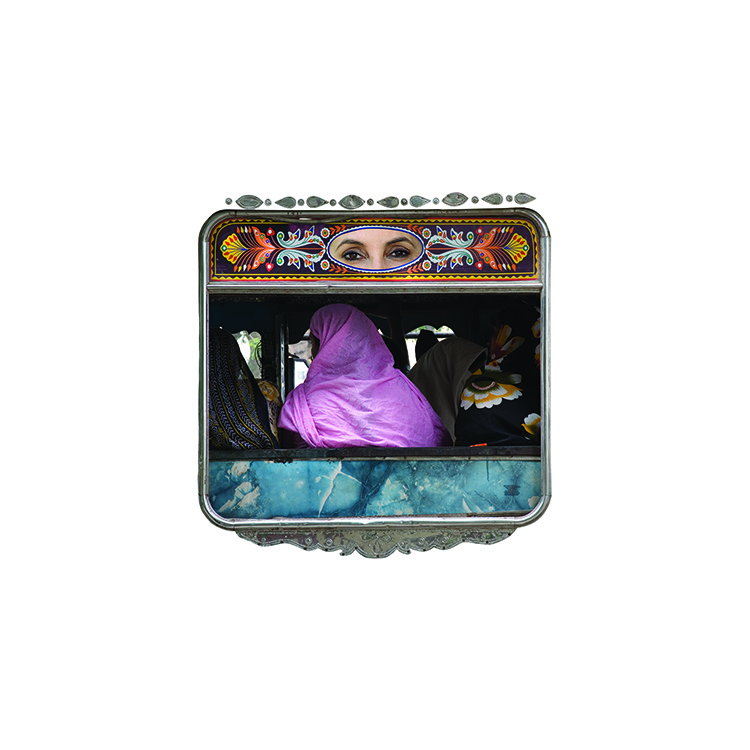 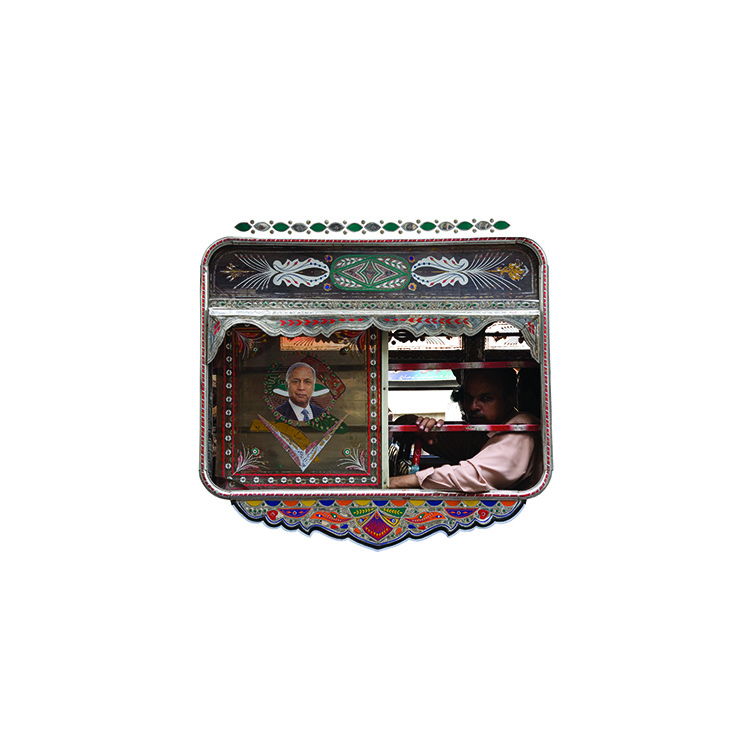 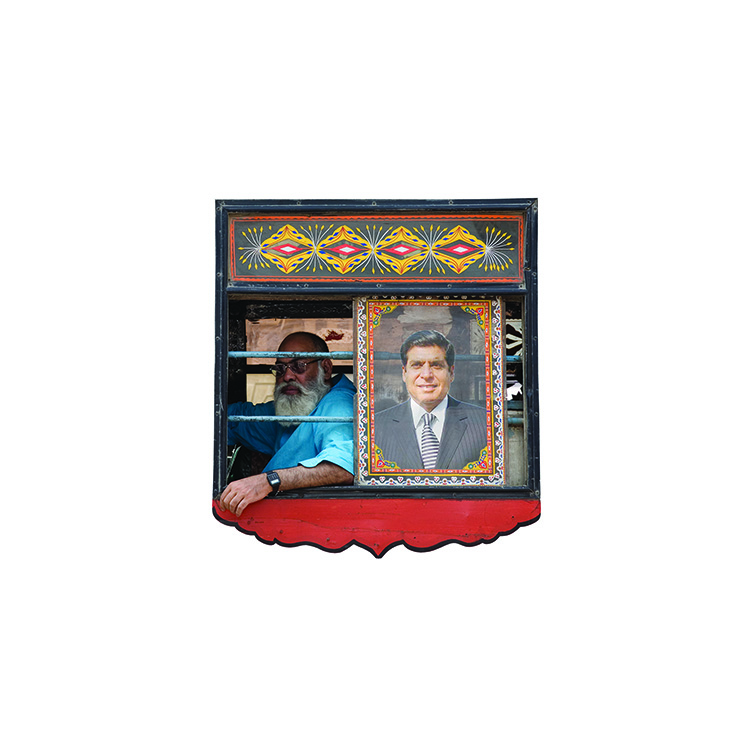