‘Stringing together the Rose Crumbs’

As a practitioner, I am interested in a variety of media but mainly work with a combination of photography, illustration and video installation.Whereas my thoughts ruminate themes of anguish and loneliness, the visual narrative attempts to express courage and resoluteness. Given my experiences, I believe that even moments of humour contain a patina of melancholy, and so in most cases my colour palette is exceedingly bright and cheerful almost to the extent of becoming nauseating or overwhelming.

In these photographs I intended to depict a somewhat obese and delusional woman in her late 50’s, captured in domestic situations, trying relentlessly to find the joy in her life, but ending up removed and lonely.

The series titled “Plastic Posies” portrays her watering fake plastic flowers, an absurd act which suggests how people may cling to false hopes and illusions, often nurturing them, believing, perhaps prematurely, that circumstances will always turn out for the best.

She sits alone at a table set up for a tea party in an image titled “Marzipan Conversation”. The overload of sugary eatables and her kitsch surroundings is an affectation of the gaudy world that she is trying to establish around her. In another image titled “I knew you would come”, she is dolled up, holding her apartment door open, lost in a blissful haze, however, there is no one at the entrance and perhaps no one will ever pay her a visit.

In “Violin”, also seen on the next page, she is visualised embroidering flowers onto her fanciful dress, expressing attachment to brightly hued blossoms, with a long, umbilical-like string –a veritable extension of her life. This is someone trying to mend her life, imbue it with elegance and beauty. Inversely, from an emotional and psychological perspective, she is pulling away at the remnants of her sanity. This project was intended to be about characters and accompanying visual signs that represent our collective sense of melancholy and remoteness – enclosed in our own shell enacting a satiric performance of being. 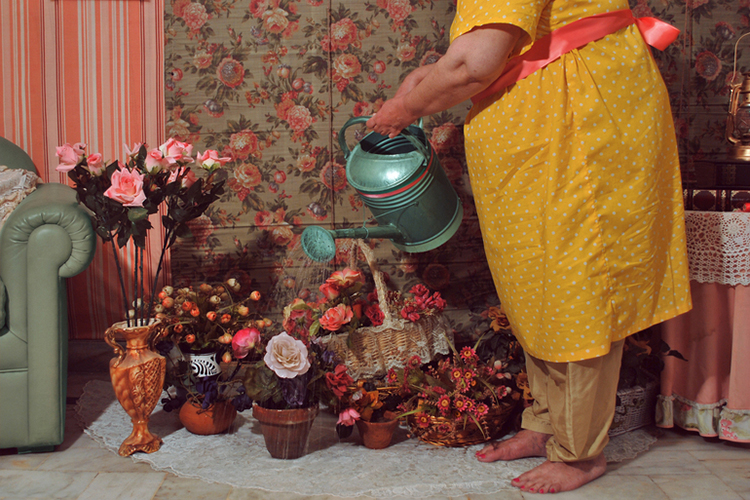 “Plastic Posies” from the series Stringing Together the Rose Crumbs, Lahore, 2012 Digital 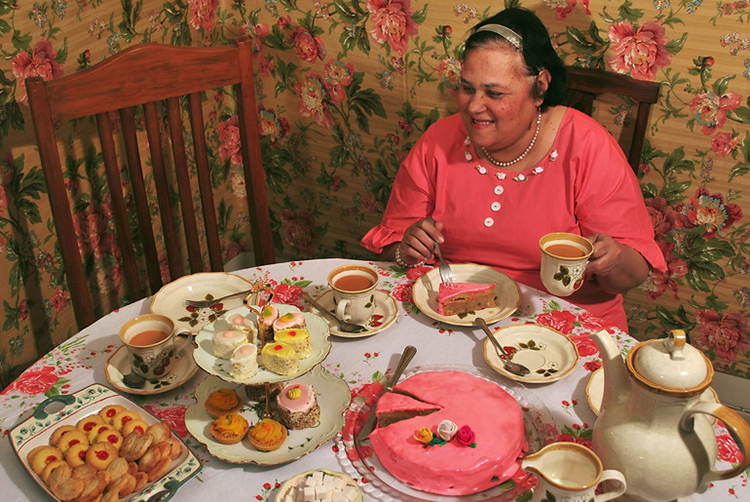 “Marzipan Conversation” from the series Stringing Together the Rose Crumbs, Lahore, 2012 Digital

“I Knew You Would Come” and “Violin” from the series Stringing Together the Rose Crumbs, Lahore, 2012 Digital