Two Sides Of A Picture

More than being a critical issue for the art of painting, I believe that ‘realism’ is the essential problem of photography. Arguably, the camera as well as digital media today provides the facility to expose nature in her most precise, accurate and actual scheme, and this makes the job of artists using photography problematic and questionable, but also liberating. Having access to a tool that translates three dimensions into a two-dimensional surface – a task historically tackled by painters since the Renaissance – the artist’s aim may well exceed capturing a likeness.

Hence as the camera becomes sophisticated in terms of its function, artists begin to employ this device extensively, drifting away from the mere act of documentary representation. Subconsciously or unconsciously (realms of the camera’s ability to mystify and de-mystify), Mariam Ibraaz and Sana Khan excavate a region behind and beyondthe surface of an image, in keeping with a kind ofSurrealism that may be matched conceptually, to the image constructions of Dali and Magritte. This impact is achieved through multiple techniques of exposure, modes of narrative and compounded compositions, so much so that photography is markedly distanced from its initial purpose –utility and understanding in order to morph into a highly personalised means of image making.

Sana Khan, in her proclivity for fantasy and fiction, constructs images as composites of reality and reverie so that the threshold of actuality and imagination can hardly be differentiated. Figures move out of windows into the void, grotesque faces form an eerie, molten environments – locationless and beyond any era of charted time.

In some of her other images, severed animal heads occupy and inundate interiors, which otherwise appear mundane, normal or familiar. Thus Khan manages to make her world a blend of things seen, together with uncanny forces as an exposition of an otherworldly existence. Asa kind of metaphoric message on our societal predicaments, in which the magic of faith and the reality of everyday life orbit around each other, the images transform daily events into a whirlwind of uncertainty, managed through realms of phantasmagoria and ephemeral encounters. The ‘unusual’ is invoked through a different strategy in the works of Mariam Ibraaz. Focusing on domesticity and fancy, the busy frames create a contrast of graceful intentions and absurd outcomes. But more than the apparent decadence or indulgence of her female protagonist, it is a sense of solitude and seclusion that marks the real content of Ibraaz’s art. A woman stitching a pattern on her apparel, watering plastic plants, or having copious cups of tea and biscuits, while sitting on her own at a large dining table – all represent whims, illusions and self-driven delusions, which dictate the lives of many who are entangled in trying situations.

Both these artists are therefore ‘creating’ images situated in the contemporary, and belong to a wider web of universal aspects dominating art practice today – the role of authorship and citation, seen as a complex of an art historical process and futuristic after image. 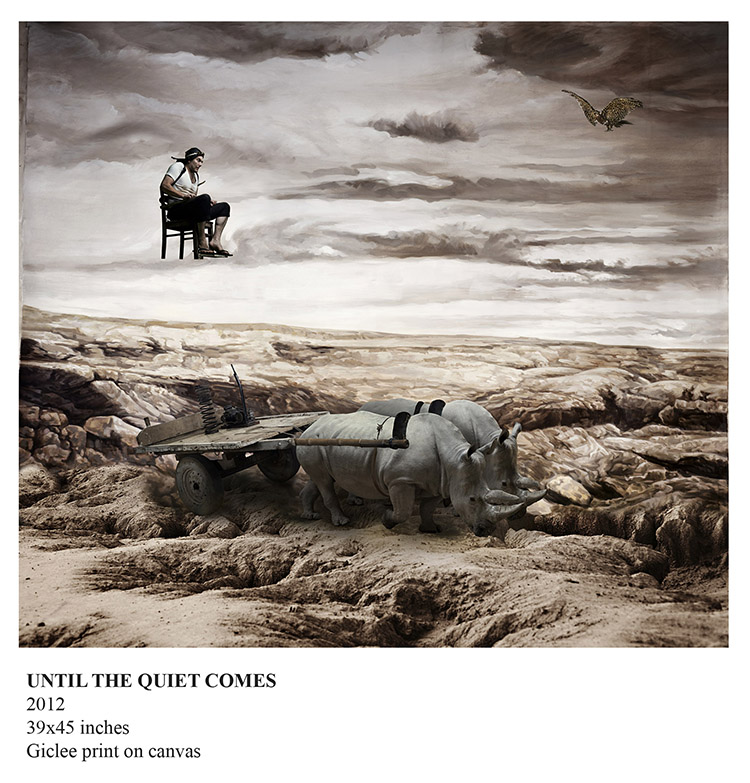 Using mixed media in constructing her work, Sana’s photographs represent both the sign of an awakening and the haunting trace of man in a forceful and enigmatic environment –where laws of nature are overturned. At the same time,this imaginary world maintains a fragile balance within the picture plane as the composition tries to veer from the world of kitsch to a lyrical sophistication, paying homage to the animation and brute energy of the Early Netherlandish painter, Hieronymus Bosch. Using the words of Charles Baudelaire, the renowned French critic and poet of the 19th century ‘it was time for photography to return to its true duty, which is to be a servant of the sciences and the arts’, the works of Sana exemplify a leaning towards a classicism, a Homeric aesthetics of an image. 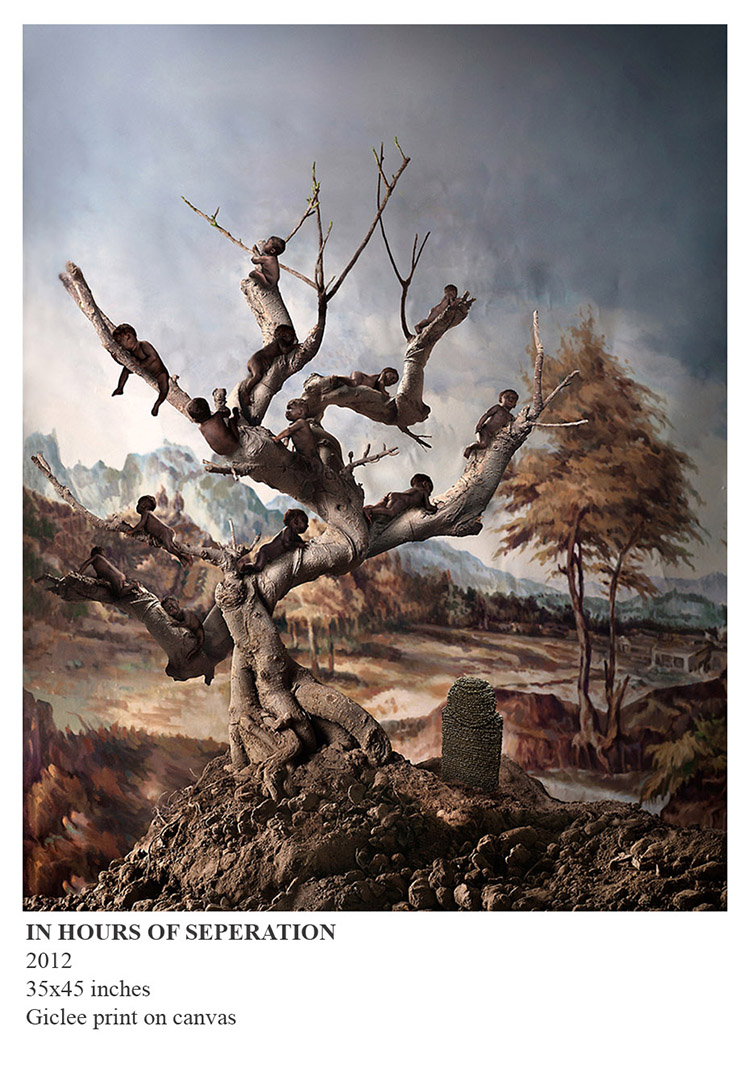 “In Hours of Separation” by Sana Khan 2012 Digital

The creation of these images also tells of her lived encounters with set builders and scene painters, as well as her meticulous and dedicated searches through the zoos, morgues and butcher shops in Lahore. Combining natural backdrops with a portraitists’ ability to layer an image, makes for a compositionally varied and dynamic style, re-negotiating the meaning of the pictorial.

In the words of the English art critic Gerry Badger, ‘we think of photographs as fact, but they canal so be fiction, metaphor or poetry. They are of the here and now but they are also immensely potent time capsules. They can be downright utilitarian or they can be the stuff of dreams’.

“Until the Quiet Comes.” is a powerful glimpse into an alternate world and is so cinematic that one can literally hear the rustling of restless rhinos and the intense breathing of a man as he sits alert in anticipation. As the eagle’s adorned wings brush the sky, for that mere moment, this sound, allows for respite; and the memory of his beloved. In “Hours of Separation,” loneliness is felt and illustrated by the presence of an adorned gravestone, overshadowed by black painted infants scattered across the bare branches of a deserted tree, a living testimony of the ghostly beauty and fragility of nature composed in a pastoral scene, without any human presence for miles.