ON PHOTOGRAPHY IN JAMIA MILLIA ISLAMIA

All the above courses have photojournalism or photography modules, offering exposure to journalists and future communicators. The emphasis has remained on practice and while the results are encouraging, the need of the hour is an accelerated focus on visual art theory and art history to be incorporated alongside practice. There is a need for a full-time MA in Photographic Arts andlor Photojournalism and Creative Documentary Photography courses in the country, and MCRC could step in to fill this gap.

Photography has, however, always remained a fringe component here. The PG Diploma in Still Photography & Visual Communication course is the only full-year photography specific course, and like most institutions, its emphasis is practice oriented.

Self-financing courses are further limited in their scope to diversify, update equipments etc. Surprisingly, though they are self-financed, they are still governed by the University Grants Commission rules whereas private Universities enjoy many liberties free of bureaucracy. Specific to the courses, one of the biggest challenges is the absence of expert advisory panels comprising academics and practitioners who can guide, audit the courses and recommend future modes of action, including periodically revamping the syllabus. But these challenges are generic to many academic institutions in India and not endemic to any specific establishments.

Jamia also comes from a so-called ‘nationalistic’ or humanistic space. It keeps its course fees, for instance, within affordable limits. But for self-financed courses, it also means struggling to meet ends often leading to a resource crunch in procuring latest industry standard gear, or paying higher fees to international and national level industry experts. Despite the challenges, in MA Convergent Journalism, we have flown in experts like Ben Edwards from the University of Westminster, Magdalena Herrera of GEO France, Erik Vroons of GUP Magazine as well as Sanjeev Saith for editing, book making and visual storytelling workshops over the years.

In 2012, I had redesigned the photojournalism syllabus of MA Convergent Journalism which on approval by the Academic Council, not only paved my way to teaching here, but also contemporised the course. Hoewever, it’s now time for another syllabus review. But since then, every year I have taught and led the subject during the i st semester (4 months; print & photo journalism) with a clear focus on improving visual literacy, and doing so through the production of photo books. In 2015, upon invitation from the Course Coordinator of MA Development Communication, I redesigned their photojournalism syllabus Keeping the focus on social change, but also ensued teaching the subject.

Our first semester deals with print and photojournalism, but sadly most students come with no prior experience of photography. From gradually training them on how to operate a DSLR, to issues of aesthetics and representational politics, they finally produce a photo book in order to assist them to understand narrative. I also try to explore the oft-ignored relationship between images and text over our conversations.

It has been proven beyond doubt that traditional ways of representation are no longer as effective as they used to be earlier during the decades of ‘the decisive moment’, a phrase coined by Bresson. There’s ample evidence to support the above claim too. If our storytellers have to communicate tales to our audiences in today’s age, then heterogeneous sensibilities of the audeince will also have to be taken into account.

It is therefore important to balance the curricula with an equal focus on theory and practice. I firmly believe that one’s practice will not yield a signature vocabulary unless one is reflective. An outward journey cannot be sustainable without an inward one as well. Such an emphasis on theory and contemporary practices during the photojournalism semester has helped students to move away from media’s cliche of using poverty, violence and suffering as typical tropes, making them reflect and question representational politics. But their immediate visual work doesn’t always demonstrate this critical understanding. However, a visible impact on their approach to composition, storytelling, tackling aesthetic challenges, ethical considerations etc. has been noticed by my colleagues dealing with television production and documentary film making in their 3rd & 4th semester.

In the professional sphere of Indian academia, I have not only noticed a dominant emphasis on producing immediate results thus intensifying student pressure, but also exacerbating the illusion of instant gratification. Such a culture leads to an emphasis on realising a tangible output through books, multimedia pieces, films or exhibits as forms of display, if not worth. To my mind, this reduces the student’s and faculty members ‘margin of error’, but curbs the room (and spirit) of experimentation. Instead, it should create an environment wherein failure (despite honest efforts) is also acceptable, so that journey inwards without fear of retribution is acceptable and understood.

Hence, alongside following the curricula, we also wanted the course to be meaningful to individual students at the personal level. Last year, Tavanpal Singh, a 22-year-old student suffering from cerebral palsy enrolled for the course. Wheelchair bound and without a steady grip, he couldn’t even firmly hold the camera, leave aside take a photograph. Yet, the yardstick of assessment was the same for everyone he had to perform to pass. Struggling to Keep apace with the world, Tavan was slipping into depression. We turned his book project, titled Conquest into a self-exploratory exercise portraying his state of mind to not only speak of the self but also represent what many young differently-abled people undergo in this country.

Very intelligently, Tavan figured out a way of remotely triggering the camera using his iPhone, and eventually published his book, and passed. The most gratifying aspect was that in the process he found a cathartic release for his emotional bent. Another young female student Priyanka, dealt with her body size insecurities and complexes through her book Size +. It helped her confront her problems, broken relationships, and occasional brushes with drugs by creating a document of those who are daily, body shamed. Other productive course-work examples include Sanjeev Saith’s editing and book making workshop in 2017, which led to Karan Anand’s photo book titled Spiral of Nothingness which explored the influence of psychotropic drugs on the mind rather than documenting the issue as a sociological problem; another student, Sarnia Ashraf followed a conceptual path to representing depression, and so on.

We have also encouraged students to write on issues which affect our ways of encountering the world. Salik Ahmed’s (now a reporter with Hindustan Times, Rajasthan) dissertation paper on the drowned Syrian boy, Alan Kurdi, analysed myriad factors behind his image becoming ‘iconic’. He investigated social-media communication patterns and explored potential reasons for the same. He compared Michelangelo’s famous sculpture of the Pieta drawing references with Alan’s image, discussing religious iconography as a potential influencer.

Unless we encounter certain creative thresholds and approaches including a critical grounding in visual art theory and the history of photography, painting, poetry, philosophy, literature and cinema, the works produced by our young visual practitioners will remain as narrow regurgitations of stereotypes.

Contemporary ‘ways of seeing’ are shifting, and with it, the need for visual storytellers to be `thinking’ photographers. However, for this to happen, an enabling environment will have to be created at the policy and knowledge sharing level. Alongside, cutting edge contemporised courses, budgetary allocations and academics of high calibre will have to be institutionalised into the curriculum. Young minds are like energy centres with vivid imaginations, but are presently stilted by the fear of failing and chained to meeting assignment deadlines. They will have to be given time to ruminate and figure out a way back to themselves, in order to pursue a path driven by passion and not fear. This can be aided through necessary policy level changes concerning visual art and visual journalism across Indian academic institutions.
NOTE: The views are the author’s personal opinion and in no way reflect the University’s official position.

A sequence from Sania Ashraf’s A Great Hope Fell where she uses a conceptual approach to deal with the subject of depression. 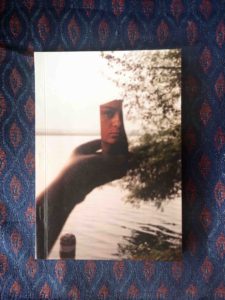