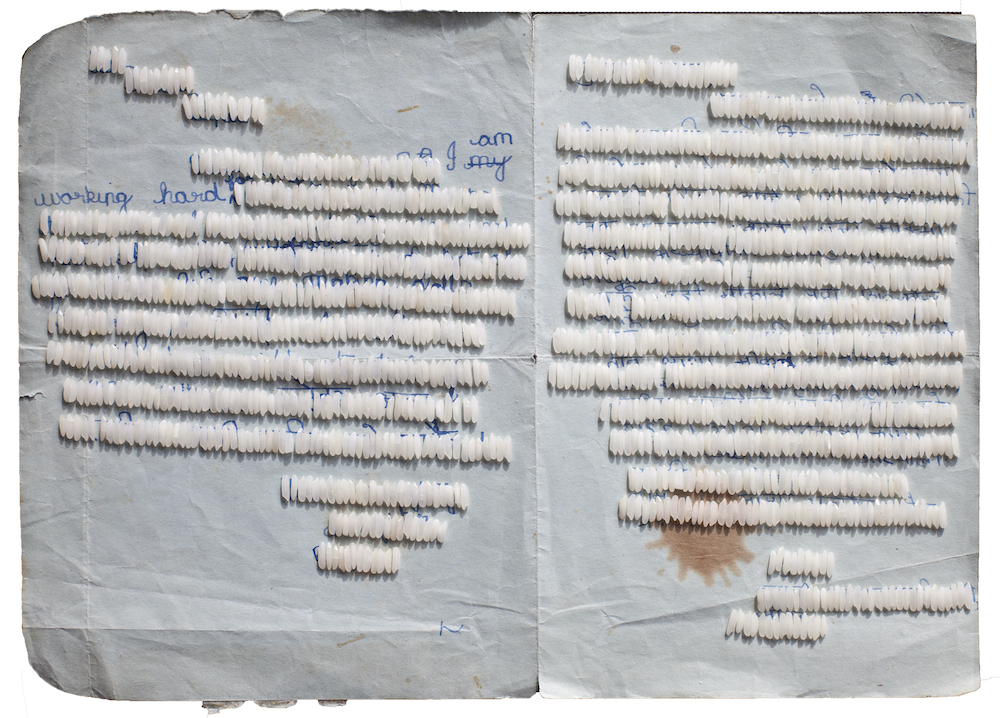 At the age of eighteen, Priya Kambli left India with half her family archive. The other half remained with her only sister, Sona, after both their parents died—within six months of each other—when Kambli was only fifteen-years-old. With an aunt in the USA offering her the possibility of a new life, Kambli carried her family within the folds of this partitioned “photo inheritance,” that eventually forms the heart of her artistic practice. Working with her archive opened up avenues for her to not just negotiate and navigate her family history, but also became a conduit to forge new ties with the severed strains of her past.

Kambli’s father was a pastry chef. “He was very ambitious, he was travelling all over… he basically missed big chunks of our lives,” she says. In acknowledging the absences that predated the death of her parents, Kambli recalls her mother, and how she became the constant figure. Her mother was the home-maker, and Kambli remembers spending hours by her side watching her in the kitchen. Her father was the image-maker, and the author of majority of the images in the archive, while others were developed at photo studios in India that the family visited regularly. Even though she resonates with her father’s love for making images, Kambli says it is her mother that is “really at play” in the work.

These family dynamics form the foundations on which Kambli’s artistic work rests, guiding its form as well as its vocabulary. Using everyday items from the kitchen including flour or turmeric, she layers the banal upon the precious; wrenching the archive out of its antiquated state into a new, contemporary language—one that positions her as not just “the daughter,” but also as “the artist.” Her practice wrestles with this dual role—the responsibility of preserving and the precarity of creating her mark on the vestiges of her family history. In doing so, she builds a dialogue with her archive, one that deploys a language that is “intimately generated” and inherently her own.

In building this new visual language, Kambli smears these powders across the prints, many times seeping over the faces and arriving at new manifestations. Shifting the locus of the image away from that intended by the original image-maker(s), Kambli distorts the composition. In doing so, she considers herself as “picking up where they left off,” and continuing not just the legacy of image-making, but also the narrativizing of her family history. Her interventions, though potent, are impermanent. It is here that she begins to appropriate the archive, moving beyond her role within it as a subject. The family begins to interweave with Kambli’s practice, shifting its narrative from how it was seen then to how she interprets it now, and would want it to be remembered henceforth.

Materiality is a premise central to Kambli’s work, precipitating intangible notions of a cultural and migrant identity into forms that can be touched, and objects that can be held and seen. The layers of flour, turmeric or kumkum are imprinted with patterns and carefully crafted geometrical motifs, drawn from Rangolis or Kolams. The humble tea sieve—embellished with the throw of light and photographed similar to images of still lifes of high value objects—is an essential item in any Indian kitchen. In working with the same material and objects—as her father did in his baking, or her mother in the kitchen—Kambli activates her past. Crystallizing the memory of ritual and occasion, she recontextualizes her family archive, to reflect her memory of the relationships and how they define her life today. The intent of the work, she says, “…always had been to forge some sort of relationship that I did not get to have.”

Searching for “a way to keep them alive,” Kambli refers to the process of making the work as a “conversation with her ancestors.” Viewing it as a “performance” between her, the image and the photographer, Kambli and her father come together as peers. Speaking of him, she says, “Through the collaboration, we would work together and I would understand something innately about him, which was our similarity in loving photography. I would understand him from that point of view—not as a parent necessarily, but as an image-maker.”

While the original images in the archive follow a more traditional documentary approach, Kambli’s interventions are more experimental, leading to more unfamiliar outcomes. In one approach, she works with near duplicates from the collection—images taken a few seconds apart, with a tilt of the head or a pursing of the lips, marking each as distinct. In an attempt to “animate” from the singular image, Kambli places them atop each other or side by side, in what she sees as stretching the time afforded by the shutter or “elongating the photographic timeline.” In doing so she plays with and pokes at the archive, arriving not just at new meanings, but also new image-forms. As an artist, this sense of play is essential in her practice, as she recognizes the control she otherwise exercises in her work, constructing and directing each image and its elements. “I felt I needed to give up control” she says, speaking about the need to “humble her work.” While Kambli refers to control in its connotation to the photographic form, in her dual role as an artist and an heir to archive—to which she can claim not just ownership but also authorship—the desire to let go may extend to the narrative itself. Despite being a studio artist, she chooses to work with natural light. The light spills, refracts and illuminates the image-objects that she creates. In doing so, she breaks the predictability of the constructed image, building her own “decisive moment” through the element of chance. In this fluid performance Kambli’s hold on the outcome loosens, allowing for not just new visuals forms, but also new readings and relations to emerge.

In an image in the series, two young women, in salwar kameez, are seated front of the camera. Kambli covers their faces with her flour motifs, leaving only their mouths visible. Recalling the image, of herself with her sister Sona, she says, “I was eighteen-years-old and she had come to drop me off. And we knew that was the last time we were going to be together.” Kambli’s interventions—isolating the beaming smiles and one’s hand over the other’s shoulder—distils their emotions into a singular tenor. While the archive is a repository of memory, Kambli finds ways to mould the past into a form that she wishes to retain and preserve for the future.

She first began working with the archive when her son Kavi, one of her two children, was born. The moment prompted an awareness that both her children would never have relationships with the people in her family photographs. For her, the work became a conduit to forge these intimacies—connecting her present to her past and revising her inheritance for the future. In the title of the series Buttons for Eyes, Kambli refers to a refrain by her mother, who often commented on her inability to notice what lay right in front of her. While speaking literally and figuratively, Kambli extends this concern to her daughter, Soha, and considers her place in the polarized world we inhabit. As a child of an Indian mother raised in a Western society, Kambli contemplates if her daughter may be, or if she has equipped her to be, “aware enough” to navigate it. In the opening image, she layers prints of her mother’s portrait on her daughter’s eyes. Resonant with Kambli’s hybrid emigrant identity, she fuses her past with her present, fiddling with the temporality of the archive. As its sole caretaker, Kambli looks to the next generation, and those who may become its heirs. Reflecting on its afterlife, she says, “I am trying to figure out how to roll this archive into my work, and maybe this is the legacy I leave for them.”

Last year, as Kambli turned forty-five, she realized that she was the same age as her mother when she had died. Having reached this point in her life—where she would continue to age beyond her mother—Kambli decided to halt her work with the archive. “I am changing, and so my relationship to the archive is changing,” Kambli said of the shifting lens with which she perceived the archive over the years. Acknowledging that it was a necessity when she began, she now felt that “It had its time, its moment,” and that she, as an artist, is “…now ageing out of the archives.”

By her side since she was eighteen-years-old, the archive has served as Kambli’s faithful companion. Both as an anchor and a cord to her familial past, its entry into her work, and her mediations, allow Kambli to not just preserve, but also shift her relations, with those in the images. Perhaps what is/was not possible in real life, is the space afforded by the archive. As a child, having experienced survivor’s guilt with her parents’ passing, and the course of her life altered forever, her performance offers a potential for resolution, reparation and perhaps healing. Her work dismantles the traditional relationship with one’s family history, the memory of which can be both traumatic and comforting. Her process affords her more agency, shifting from what she can remember, to what she chooses to remember and how. In mediating the remnants of her past, Kambli builds a new, reimagined archive of her hybrid identity, folding the complexities of family dynamics within it, and recasting it, for the legacy she eventually leaves for her future. On deploying art-making as a cathartic tool, she says, “I have always felt that as an artist, I am braver than as an individual.”

Tanvi Mishra works with images as a photo editor, curator, and writer, based in New Delhi, India. Among her interests are South Asian visual histories, peoples’ movements as well as the notion of fiction in photography, particularly in the current political landscape. Until recently, she was the Creative Director of The Caravan, a journal of politics and culture published out of Delhi. She is also part of the photo-editorial team of PIX. She works as an independent curator and has been part of the curatorial teams of Photo Kathmandu, Delhi Photo Festival as well as the upcoming Breda Photo to be held in the Netherlands in 2022. Her writing on photography has been published in various platforms including Aperture, FOAM and The Caravan. She has served on multiple juries, including World Press Photo, Hindu Photojournalism Awards and the Catchlight grant. She has also been a mentor for the Women Photograph program and is a member of the international advisory board of World Press Photo.