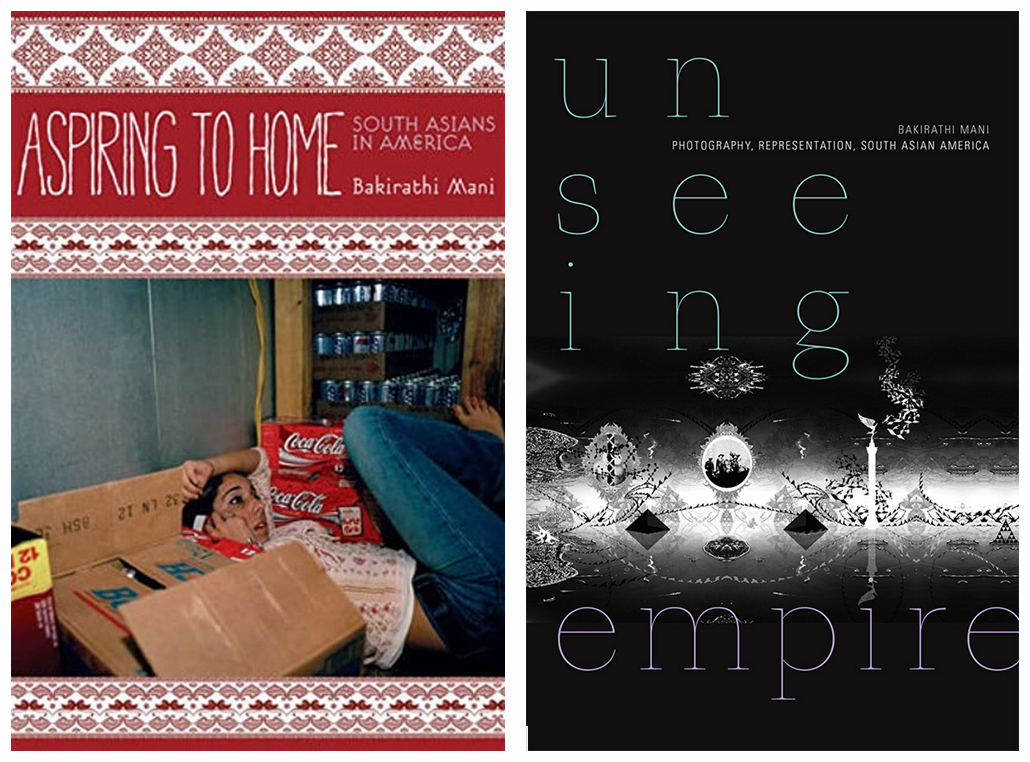 As I write in the book, I am the daughter of Indian immigrants to Japan. And yet, though my parents left Bombay in 1976 and lived in Tokyo for nearly thirty-five years, they never thought of themselves as “immigrants,” nor did we ever use the word “diaspora” to describe ourselves.  Growing up in Tokyo, I was always taught that I was “Indian”; but every time I visited India as a child and later studied in Delhi as an adult, I never felt quite at home.  Despite a large and loving extended family in India, I was insistently reminded of my difference; and likewise, despite a close network of classmates and family friends in Tokyo, I was always reminded that I didn’t belong to Japan.  Indeed, it wasn’t until I came to the United States for college and engaged with peers who were Asian American, South Asian, Black and Latinx that I realized that identifying as an immigrant (in Japan as well as in the United States) can operate as a political and racial identity: that you could work to claim a place as “home” despite – or perhaps especially when – you are told that you don’t belong there. 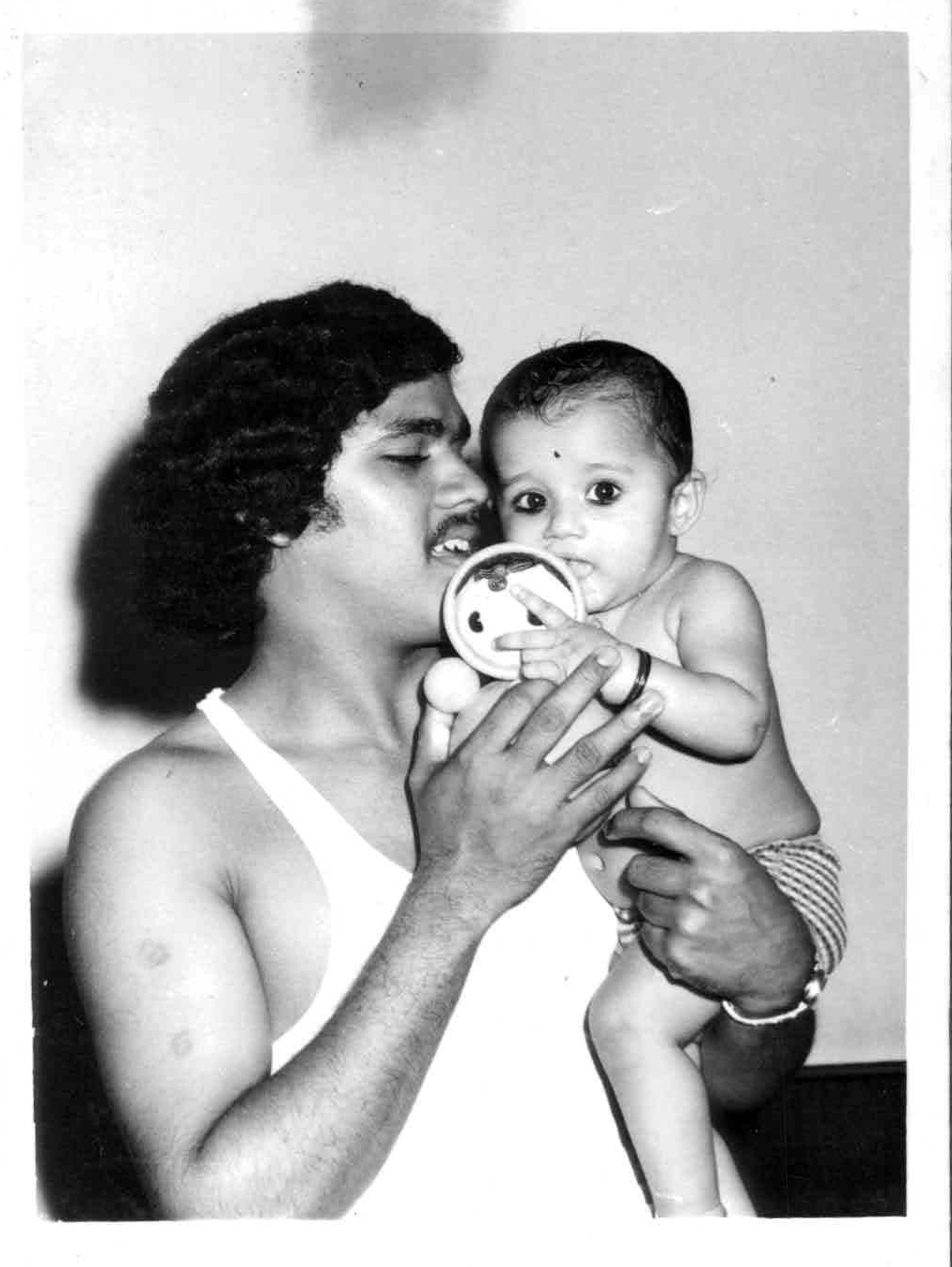 Bakirathi Mani with her uncle in Mumbai, c.1975.

Aspiring to Home (Stanford University Press, 2012) emerges out of this collective experience of diaspora: how does one craft relations of identity and belonging to a community or to a country?  What does it mean to identify as “South Asian,” a construct that acquires political and cultural meaning outside of South Asia?  I think about belonging as an aspiration that, to borrow the cultural critic Stuart Hall’s words, “is never complete, always in process, and always constituted within, not outside representation.”[1]

Precisely because the fact of belonging – to country, community, nation – is always an incomplete process, I am simultaneously interested in experiences of alienation and ‘unbelonging’.  Certainly, for South Asians in diaspora who identify as queer or feminist, as trans or gender non-conforming, and who resist middle-class norms of upward mobility, belonging to heteronormative constructs of the family and nation, can never be the end goal.  I wrote Aspiring to Home with these diverse experiences of diaspora in mind – that immigrants’ aspirations to belong is central to the political work of creating community and solidarity; and that our desires for belonging may also make us complicit with heteronormative and patriarchal formations of family and home(land).

In my recent book, Unseeing Empire: Photography, Representation, South Asian America (Duke University Press, 2020) I examine how empire continues to haunt South Asian American visual cultures, specifically in relation to photograph-based art by Gauri Gill, Annu Palakunnathu Matthew, and Seher Shah.  I bring together close readings of fine art with archival research and ethnographic fieldwork at museums and galleries across India and North America. For many South Asian immigrants, including myself, photography is the only material archive of our lives.  We cannot find our histories recorded in national and public archives, and so we look to photographs to tell us who we are. I’m interested in why South Asian Americans look to photography as an archival record; how photography can refuse to show us the representations that we’re looking for; and in what ways photography reshapes our sense of the time and space of immigration.

Shifting from the literary, cinematic, and performative texts that composed Aspiring to Home, to the fine art photography that defines Unseeing Empire, has broadened and challenged my understanding of what is and what isn’t ‘home.’  First, in writing Unseeing Empire, I was compelled by the transnational archives of photography that shape South Asian American representation.  So often in the United States, South Asian diasporic visual culture is framed by U.S. nationalist narratives of what it means to be ‘American.’  For example, in viewing Annu Palakunnathu Matthew’s series,  An Indian From India (2007) we may immediately recognise how she models her self-portraits on Edward Curtis’s settler colonial photography of “Natives” and First Peoples in North America.

But what I also see in these diptychs is the legacy of British imperial photographs of “natives” in South Asia – particularly the long legacy of colonial ethnographic photography that is archived in volumes such as The People of India (1868-75) produced nearly a half-century before Curtis’s photographic collection, The North American Indian (1907-1930). Both of these histories – of British colonialism and U.S. settler colonialism – are central to how we understand Matthew’s performance photography, as well as South Asian diasporic viewers’ identification with those images as a representation of ourselves. 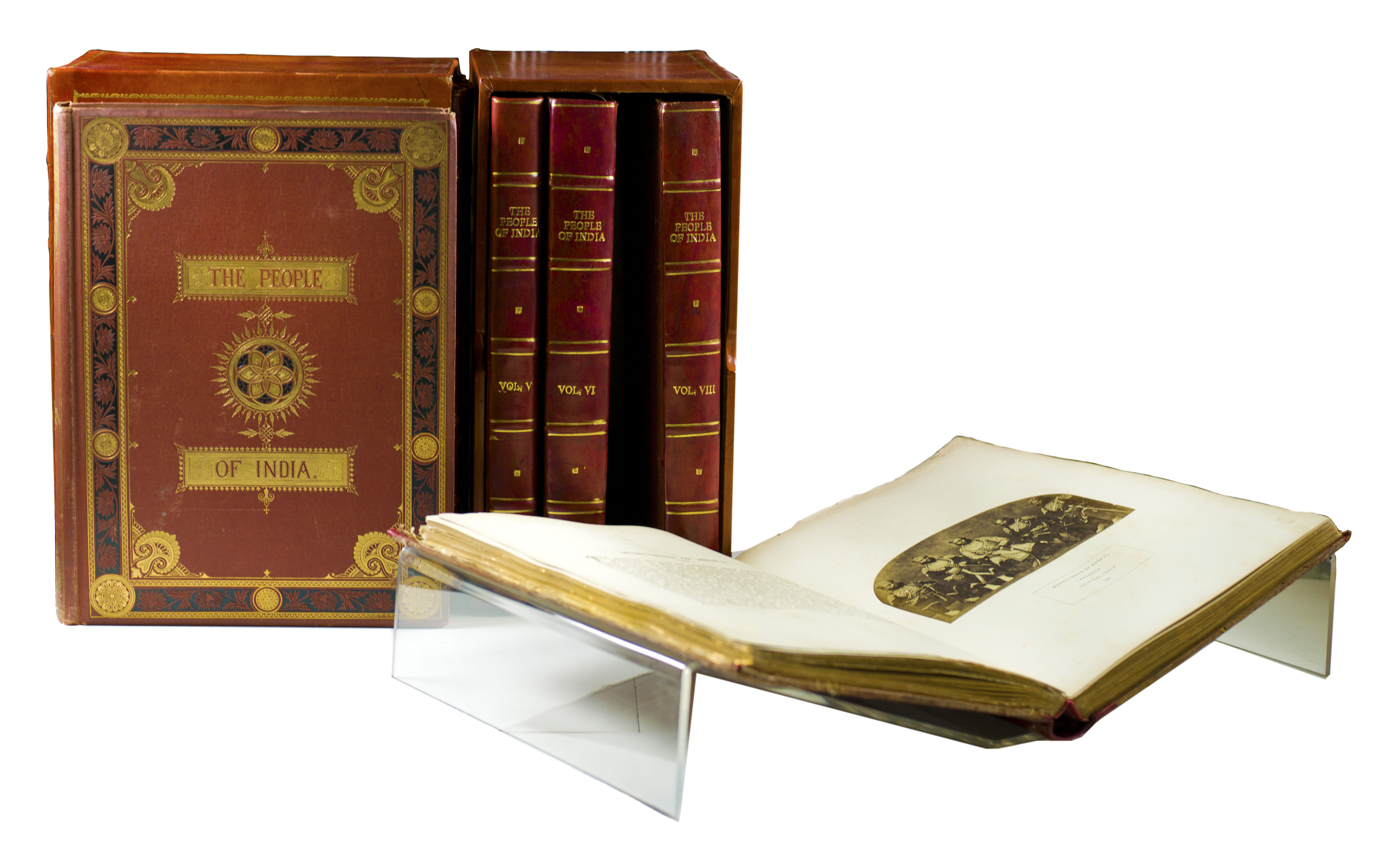 The People of India series (1868-75). Eight volumes. The Alkazi Collection of Photography 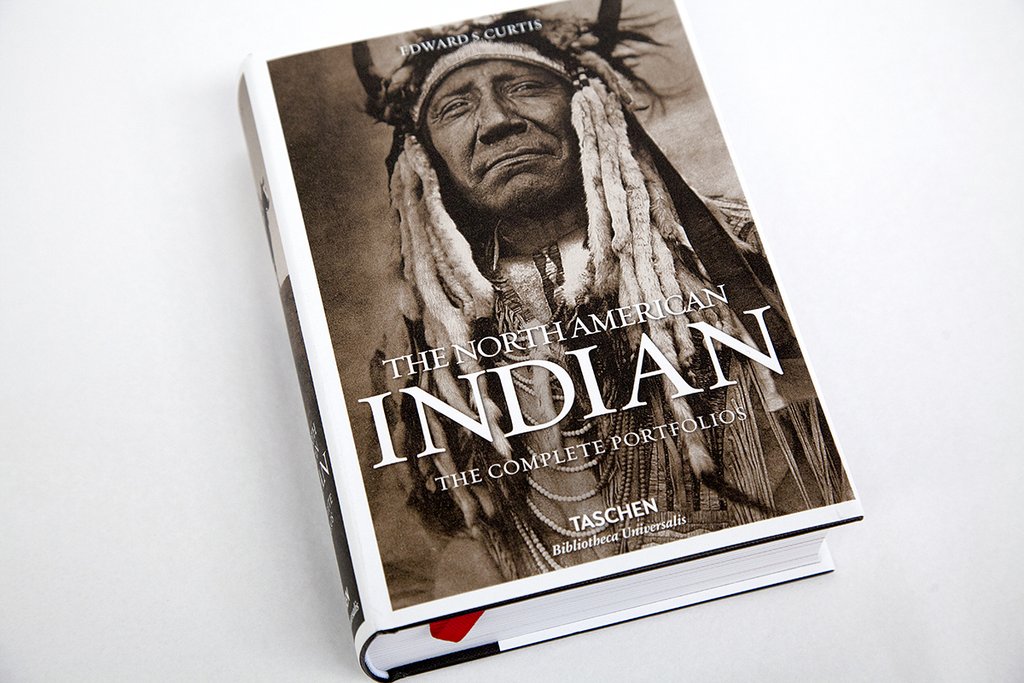 Second, the artists that I discuss in Unseeing Empire claim various places as ‘home.’  Matthew was born in England, moved in India as an adolescent, and migrated to the United States as an adult; Shah is Pakistani, but was raised across Europe, educated in the U.S. and now lives in Delhi; Gill grew up in Delhi but has lived for extended periods of time in the U.S.  And of course, all these artists’ works have circulated globally.  So what it means to claim a single city or country as ‘home’ is actually refuted by their artworks. For example I read Gill’s photographic series, The Americans (2000-2007), which focuses on South Asian immigrants across the United States, not simply as an evocation of Robert Frank’s 1958 series by the same name, but rather as a refutation of the power of the camera to surveil and document racialised subjects.  In her attention to the objects as well as the subjects that define immigrant lives, Gill’s The Americans fractures the very notion of photography as a documentary apparatus of the nation.

Third, the photograph-based works that these artists create, compel us as viewers to reconsider what we know as ‘home.’  Across a decade of seeing and reflecting on Seher Shah’s drawing Geometric Landscapes and the Spectacle of Force (2009), I have been compelled by Shah’s use of British colonial landscape photography (particularly photographs of the 1903 and 1911 Delhi Durbars) within drawings that are defined by her contemporary architectural sensibility.  Shah uses the reverse negative image of these photographs, so the images create a haunted sensibility within her work.  Though I first saw Shah’s drawings at an exhibition in New Delhi, I returned to them year after year; and I later realised that Geometric Landscapes also evoked for me the experience of watching the World Trade Center in New York City crumble on September 11, 2001.  My recognition of both of these histories – the spectacular display of British empire on the Indian subcontinent in the early twentieth century, and the expansion of U.S. imperial power in the early twenty-first century – is linked to two regions of the world that I consider as ‘home.’ In drawing these histories together I found that Shah’s artwork represented my own diasporic localities.

In many ways, Unseeing Empire amplifies the claims that I make in Aspiring to Home.  In Aspiring to Home, I demonstrate how South Asian diasporic identities and communities are produced through the relation between U.S. racial formation and global movements of class and capital in South Asia.  In Unseeing Empire, I build on that claim by considering how South Asian diasporic artists and viewers collaborate to produce representations that are shaped not only by multiple histories of empire, but also by diverse contexts of display – whether they be commercial galleries in New Delhi and Mumbai, or natural history museums in Washington D.C. and Toronto. Here I am specifically referring to Seher Shah’s exhibit From Paper to Monument (2009) and Gauri Gill’s The Americans at Nature Morte Gallery in New Delhi (2009-2010); and also the Beyond Bollywood (2014-15) exhibition at the Smithsonian National Museum of Natural History in Washington DC. 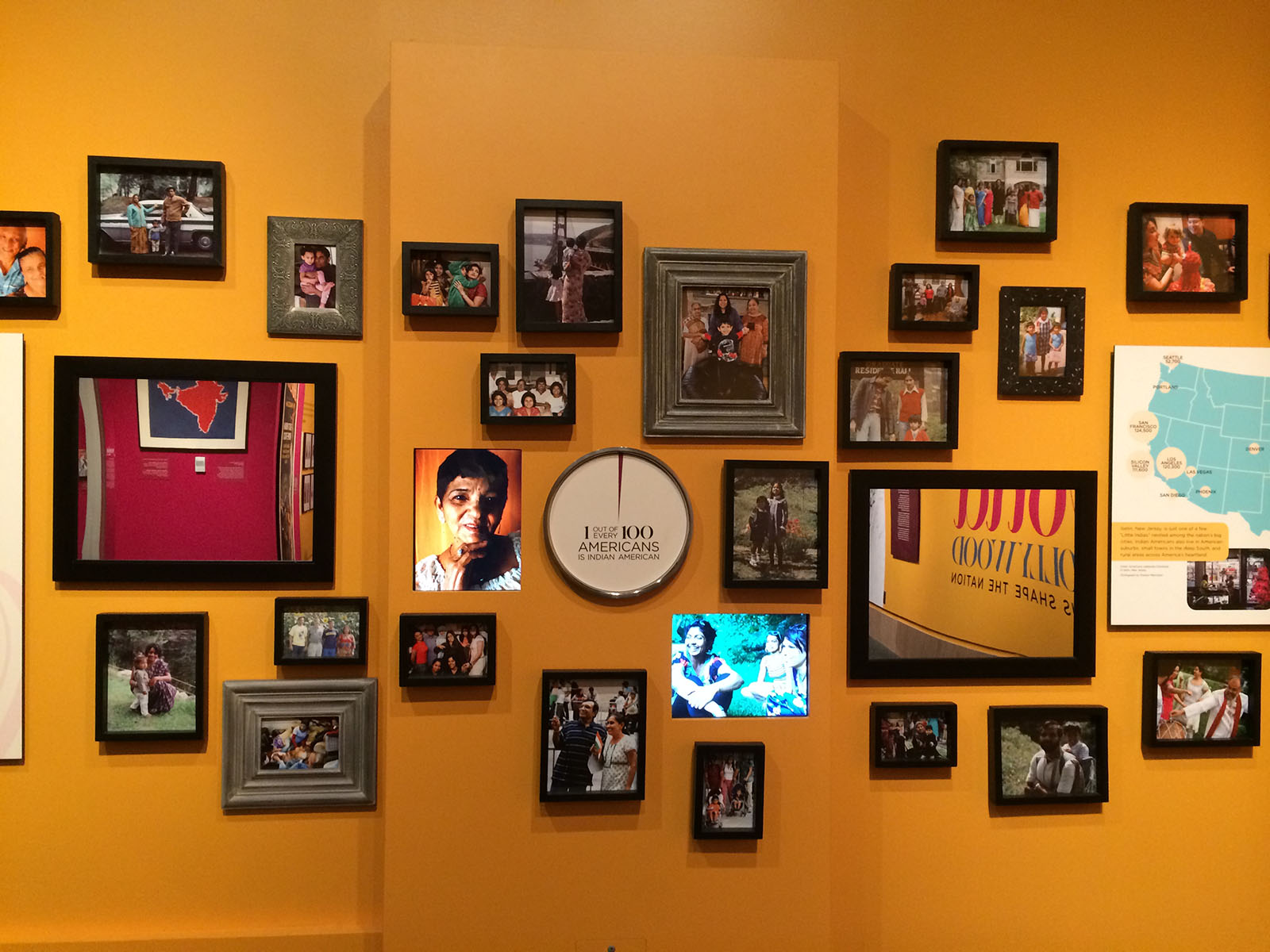 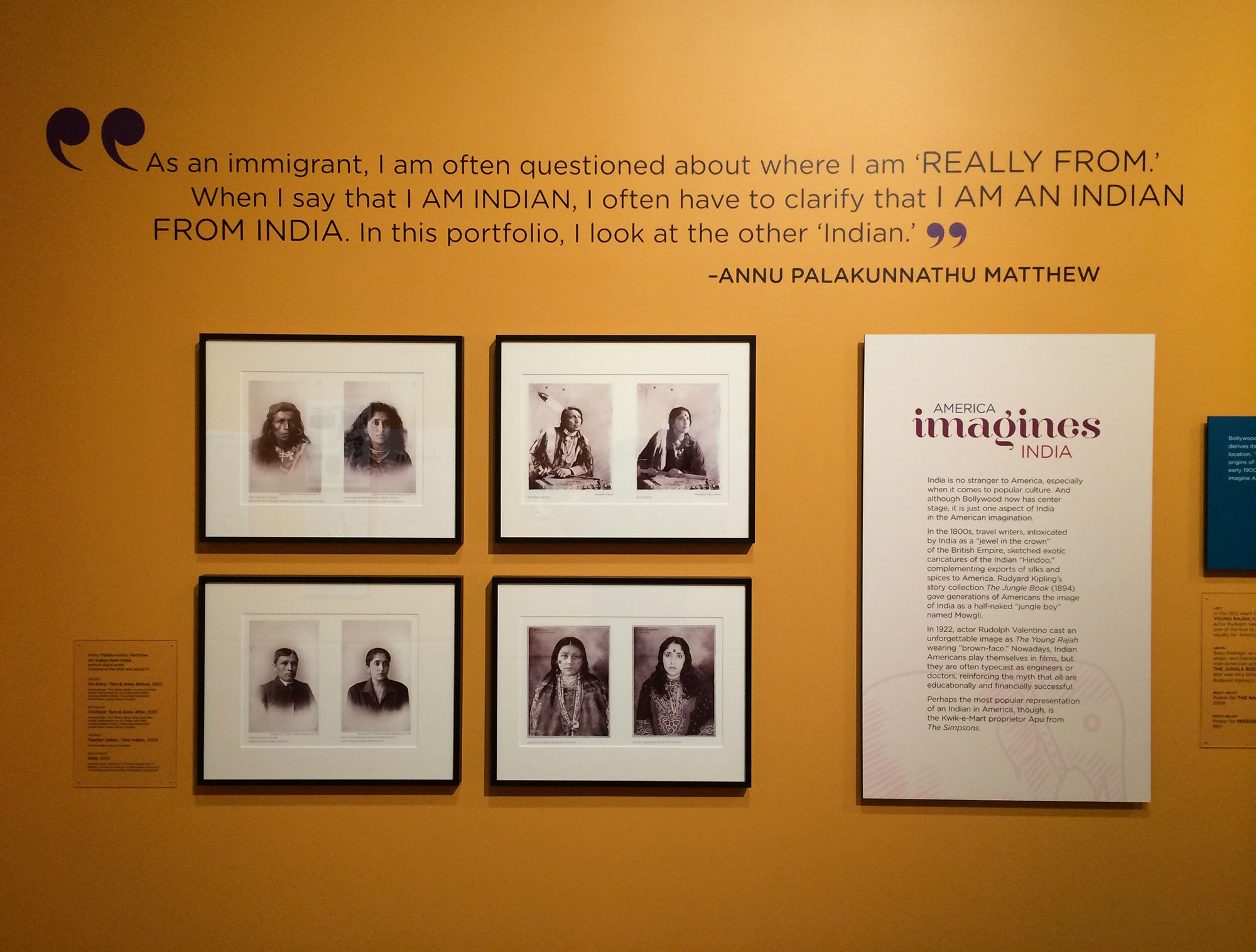 Across both my books, what I emphasise is that the category of diaspora disrupts and reconfigures nationalist narratives of statehood and citizenship both in South Asia and in the United States.  In literary as well as cinematic narratives, South Asian immigrant experiences are often represented as if these experiences begin with the immigrant’s arrival in the U.S.; as if immigrants start life afresh, and as if they have no memories of other pasts, other places, other histories.

What I emphasise in Aspiring to Home is that South Asian diasporic identities and communities are constituted through multiple experiences of statehood (in postcolonial South Asia as well as in a multiracial America) as well as by diverse (upwardly and downwardly-mobile) experiences of citizenship.  In Unseeing Empire, I am concerned with how the difference that diaspora makes is erased in visual displays of Asian American art as well as of contemporary South Asian art.  Even though South Asian diasporic artworks are central to exhibitions of Asian American art, in many of these exhibitions the difference that diaspora makes – to aesthetic narratives of race and gender, sexuality and class – are elided to create uniform narratives of American citizenship. Similarly, though South Asian diasporic artists are frequently included in exhibitions of contemporary South Asian art – whether at biennales or at major museum shows of Indian and Pakistani art – the specificity of diasporic experience and visual representation is eclipsed by the expansive domain of the state. Here I am referring to the Kochi Biennales (where Gauri Gill’s work was shown in 2016, and Annu Matthew’s work in 2018; but neither of their works on display at those biennales are the specific artworks I discuss in Unseeing Empire).  I am also referring to museum shows which include Hanging Fire: Contemporary Art From Pakistan (2009-2010), and Edge of Desire: Recent Art in India (2005).  Gauri and Annu’s work were also exhibited at India: Public Places, Private Spaces  at the Newark Art Museum (2007).

The category of diaspora disrupts how we understand narratives of nationhood, identity and community, and that’s precisely why I work towards creating transnational frameworks for thinking, seeing, and experiencing representations of South Asians in diaspora. 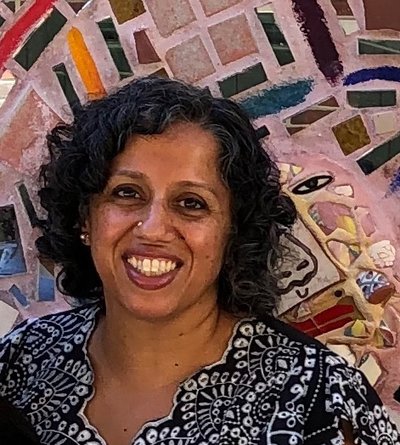 Bakirathi Mani is Professor in the Department of English Literature and Coordinator of the Gender and Sexuality Studies Program.  A scholar of Asian American Studies, Postcolonial Studies, and Transnational Feminist/Queer Studies, she has taught at Swarthmore since 2002.  Mani is also a curator of South Asian diasporic visual cultures, and regularly collaborates with artists, academics, and activists on public events with Asian American arts organisations in Philadelphia.