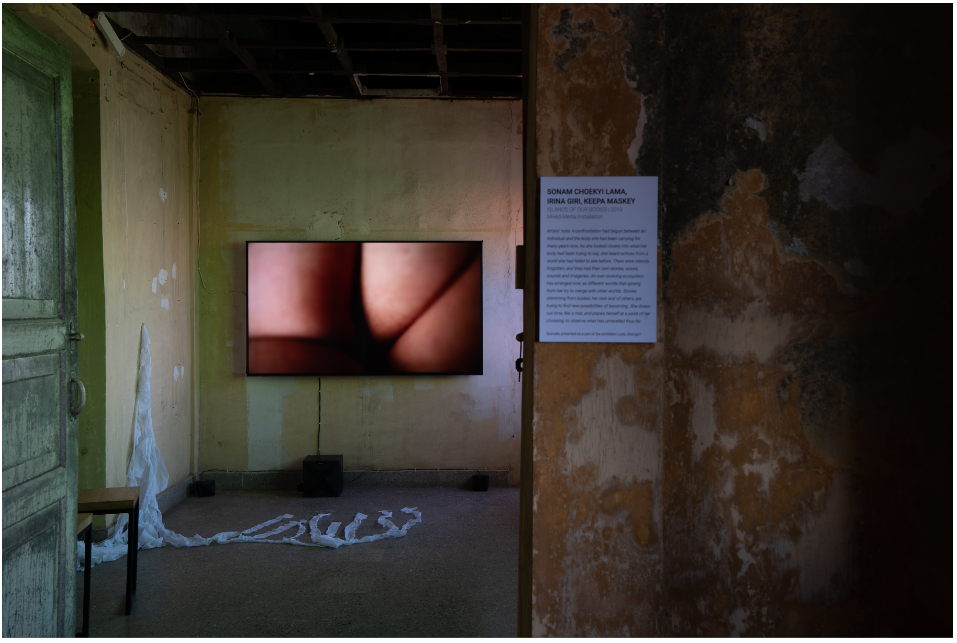 Installation View from Islands of Our Bodies in the exhibition Look,Stranger! at Serendipity Arts Festival Goa, 2019. Image: Philippe Calia

This week, we were delighted to be in conversation with Keepa Maskey, Irina Giri and Sonam Choekyi Lama, who came together as a collective, a spontaneous formation, to give rise to the project Islands of our Bodies (IOB hereafter) that has had two manifestations – in Kathmandu (2018) and Goa (2019). Based in Kathmandu, Nepal, they have been working together to explore various social facets and corporeal dimensions of the female body. The body as landscape, an isolated form, and the connections made within the body – a microcosm of an internal world – as well as the many metaphors it generates around selfhood, proximity and even trespassing, become the ground from which they theorise and construct their multimedia installations and performances.

In this conversation, they describe their process of working together with various media – photography, textile, performance and text – so as to create an immersive and introspective dialogue with the viewer. They emphasise the sharply inward looking nature of their inquiry, turning the feminine gaze on itself and outwardly to explore, expand and assimilate the experience of the female body.

With this project we really wanted to shift the discussion from the external female body, to create more of a movement between the internal and the external.

Initially put together as an exhibition at Kaalo 101, an independent art space as a part of Photo Kathmandu, IOB was also invited as a site-specific installation at the exhibition Look, Stranger! as part of the Serendipity Arts Festival, Goa in 2019/20.

The artists speak around the multiple experiences of realising their work in two very different spaces, sharing how the space itself became an organic and active agent in their conversations. Exhibiting in an old Newari house at Kaalo, for them the house took on the figure of a  graceful body, whose nooks and corners became passages to an inner world, realising itself through the exposures of light, sound and images .

Talking about using performance and the lens to work through traumatic experiences in relation with the body, Keepa traverses the undulations of her own memories as  anchoring points to engage with self exploration and realisation. The trio are constantly in conversation about the relationships between the real and the imagined – and how photographic media,a documentary form is not only used to archive their installations but also contribute to the making of embodied experiences.

I’m really interested in storytelling through reality based fantasy.

The idea of of the sensorium, a multi-sensory moment, orchestrated through fragments becomes central to how Islands of Our Bodies is an urgent call to seeking a creative outlet  for both latent and manifest encounters between the self and the world. Using the intuitive, emotional qualia of sound and textile, their stories speak beyond the refrain of the singular, the local or the situated.