The Art of Engagement: In conversation with Sonal Khullar

In conversation with Rahaab Allana 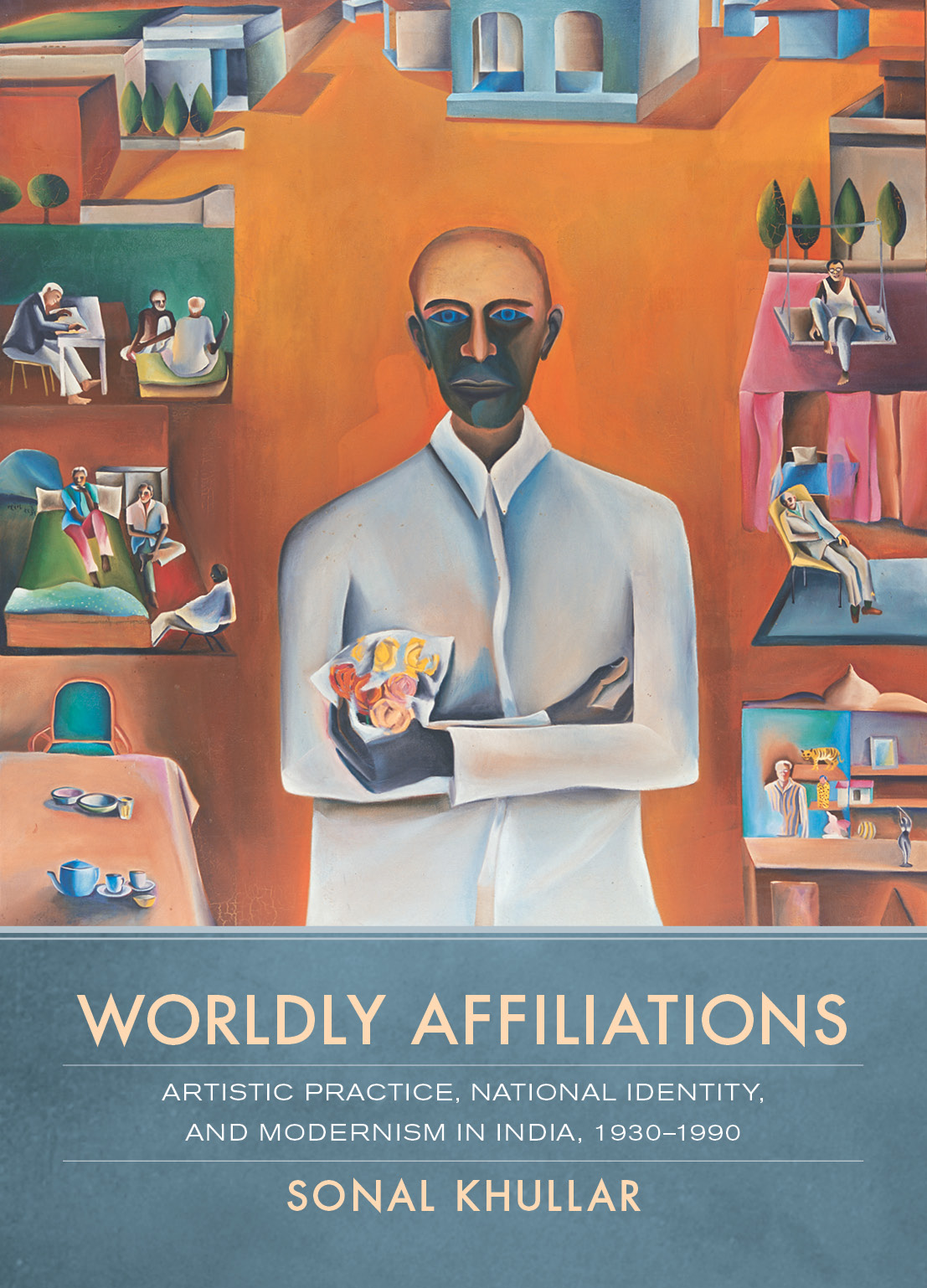 The four artists I wrote about in Worldly Affiliations (University of California Press, 2015), Amrita Sher-Gil, M.F. Husain, K.G. Subramanyan, and Bhupen Khakhar, were primarily painters even if they worked in other media, including sculpture and film. Husain and Khakhar were lifelong enthusiasts of cinema and popular culture. Husain dreamed of making films as a child. You see this evidence of this engagement in Husain’s remarkable film Through the Eyes of a Painter (1967), produced by the Films Division of India, in which he reflects on the relationship of art and craft, city and village, handmade and mechanical forms. Less well-known than his feature-length films Gaja Gamini (2000) and Meenaxi: A Tale of Three Cities (2004), starring Madhuri Dixit and Tabu respectively, Through the Eyes of a Painter was exemplary of a period of modernist experimentation with film and photography in India, including works in those media by Nasreen Mohamedi (who accompanied Husain on his travels in Rajasthan as he researched Through the Eyes of a Painter), Nalini Malani, Tyeb Mehta, and Akbar Padamsee, many of whom were associated with the Bhulabhai Desai Institute, an artists’ centre in Bombay. Some of these works have been featured in recent exhibitions, but they have not been theorised or historicised as a whole.

Khakhar’s playful openings and self-designed catalogues, for example, Truth is Beauty and Beauty is God (1972), made clever use of photographs. In these photographs, he posed as cowboy and playboy, James Bond and Andy Warhol, Parsi wrestler and Hindu groom, advertising model and provincial official. Khakhar’s photographic performances were crucial to his painting and revealed his commitment to bringing art closer to life (you can see connections to Pushpamala N.’s and Nikhil Chopra’s contemporary art practices in these works). Although photography didn’t occupy the same status as painting for Khakhar, it was a key influence throughout his career and a tool of creative expression and public relations like his writing and collecting.

Writing in the journal Vrishchik in 1969, Khakhar identified “visual sources” for his art, noting with admiration: “Photographs of a family group near Taj Mahal, newly married couple in a cinema pose near Chamba Dam….Photographs of the British Raj, Viceroys, battalions of attendants, pomp, hypocrisy, and glamor of white skin.” You can see the effects of these sources in his paintings Hamamkhana [Bathhouse] (1968) and Tiger on the Bridge (1969). Khakhar had a strong hand and eye on Messages from Bhupen Khakhar (1983), a film directed by Judy Marle for the Arts Council for Great Britain. I smiled at scenes clearly staged by Khakhar and referring to his paintings such as the display of a stuffed feline and visit to a local zoo, or his delight at a ticket booth outside a cinema where he prepared to enjoy “Hindi film with their perverse absurdity.”

Husain and Khakhar were not alone in their commitment to translation across media, sites, and languages, a hallmark of modernism in India. This commitment was shared by other artists and intellectuals who rejected purity and opticality, cherished values of Greenbergian modernism, in favour of interdisciplinarity and intermediality. Their translation was a rebellion against academic societies and colonial art schools and a critique of the aesthetic agendas of the anti-colonial nationalist movement and postcolonial nation-state. My scholarship has illuminated that practice of translation by focusing on works across media (painting, sculpture, photography, film, performance, and installation) and analysing the relationship between the performing arts and visual arts in Almora in the 1930s and 1940s; the relationship between art criticism and visual art in journals such as Marg and Thought in the 1940s, 1950s, and 1960s; and the relationship between literary and artistic modernism in the works of painters and poets in Bombay during the 1960s and 1970s enacted on the pages of journals such as Vrishchik. 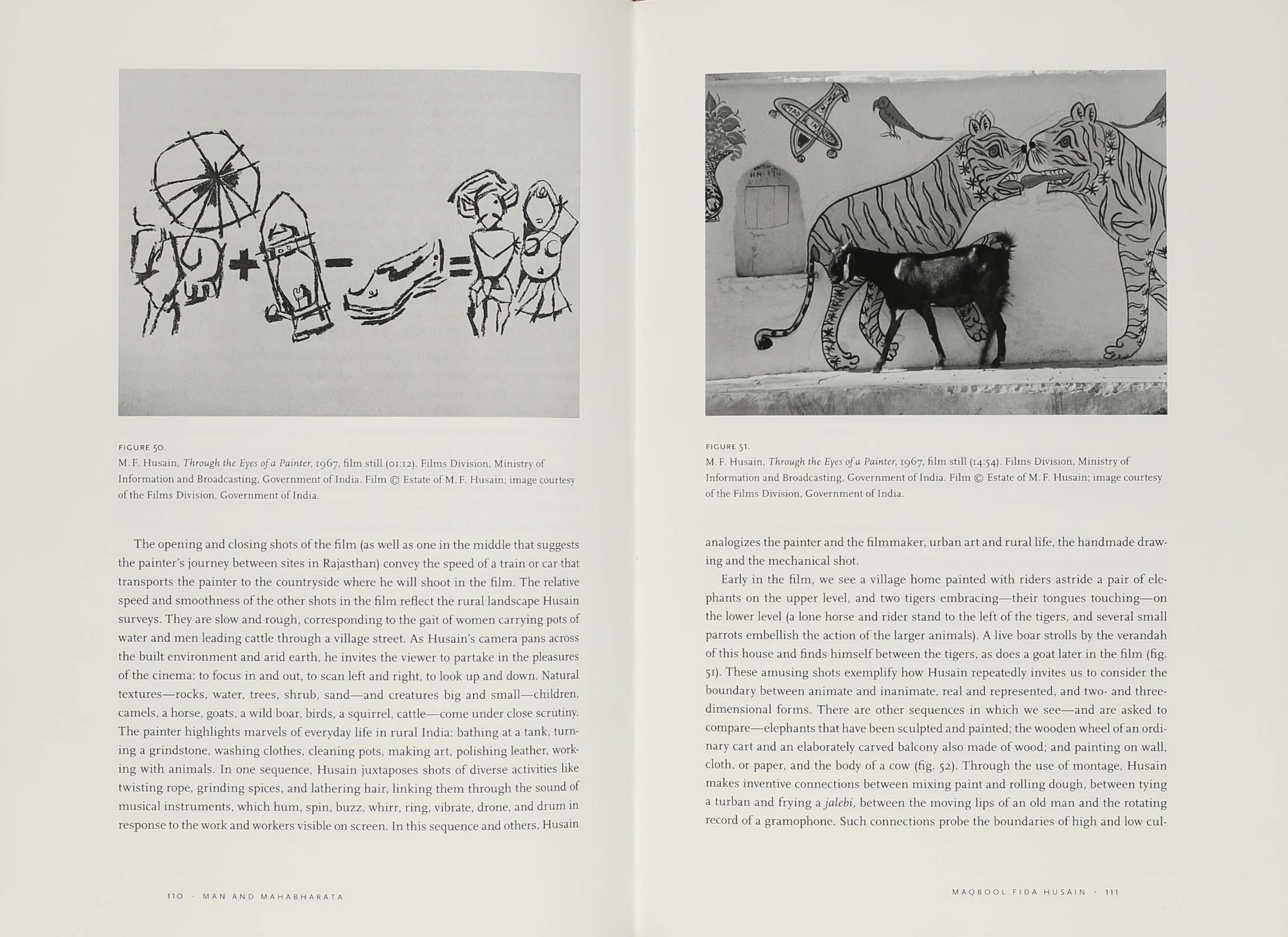 Spread from the book Worldly Affiliations showing stills from Through the Eyes of a Painter by M.F Husain, 1967.

As I show in Worldly Affiliations, the idea of platforms, postcoloniality, and the artist-as-citizen and critiques of the market and museum, globalization, and international exhibitions were already in place in the 1960s, though we tend to regard these as recent developments and the prerogatives of contemporary art. That said, contemporary art has a different relationship to medium and discipline than modernism. Following the destruction of the Babri Mosque in Ayodhya in 1992, many artists in India such as Navjot Altaf, Rummana Hussain, Nalini Malani, N. Pushpamala, N.N. Rimzon, and Vivan Sundaram, born in the 1940s and 1950s, who had worked as painters or sculptors, created performance works or multi-media installations. Their art aimed to reach new publics and effect social change, even as it was shown in galleries, museums, and biennales or other large-scale international exhibitions.

In the past two decades, contemporary artists have explored other ways of relating art and politics through critiques of the art object and gallery system, experiments with the boundaries of experiments with the boundaries of art and life, and an embrace of collaborative working methods. A turn to performance, counter-monuments or anti-monuments, informality, and ephemerality is apparent in the works of the Dialogue Interactive Artists’ Association based in Kondagaon, Chhattisgarh and the Gram Art Project based in Paradsinga, Madhya Pradesh, to name two groups that I’ve written about in an article, “Artist as Fieldworker,” for the Lahore Biennale Reader. These artists reject aesthetic and political strategies such as representation and demystification or shock and disruption, which characterised modernist and Left cultural practice in India. Their art emphasises affect, duration, presence, and interaction, and calls attention to the work of the work of art, that is, to process rather than product, to persons rather than things, and to collective actions rather than individual agency.

In Worldly Affiliations, I used the term “postcolonial worldliness” to consider the complex belonging to nation and world of artists and intellectuals in twentieth-century India. That sense of belonging as unbelonging, or cosmopolitan secularity, was shared by critics such as Mulk Raj Anand, Rudy Von Leyden, Richard Bartholomew, Octavio Paz, J. Swaminathan, and Geeta Kapur as well as the artists about whom they wrote. The agonistic response to a major exhibition of American painting in India and the visit of American critic Clement Greenberg to New Delhi in 1967, which I discuss at length in Worldly Affiliations, instantiated postcolonial worldliness and laid the ground for a globalising art world, for what Terry Smith has called “the postcolonial turn” and what Joan Kee has called the “world as practice.” For these art historians, the art world was a site of inequality and injustice and a platform for critique and creative action.

In India, that critique and creative action took the form of art practice, criticism, institutions, and exhibitions. In my writing on modernism, I discuss how artists and intellectuals articulated postcolonial critique and challenged the organisation of the world and its areas (e.g. East and West, Orient and Occident, Great Britain and the Commonwealth of Nations, First and Third Worlds, global South and North). Visual art has been a crucial – if understudied by comparison to literature, cinema, and theatre – means for making claims to freedom, value, identity, and place in modern South Asia. Visual artists understood that colonialism has an enduring legacy and decolonisation is an ongoing process in South Asia as in much of the world. 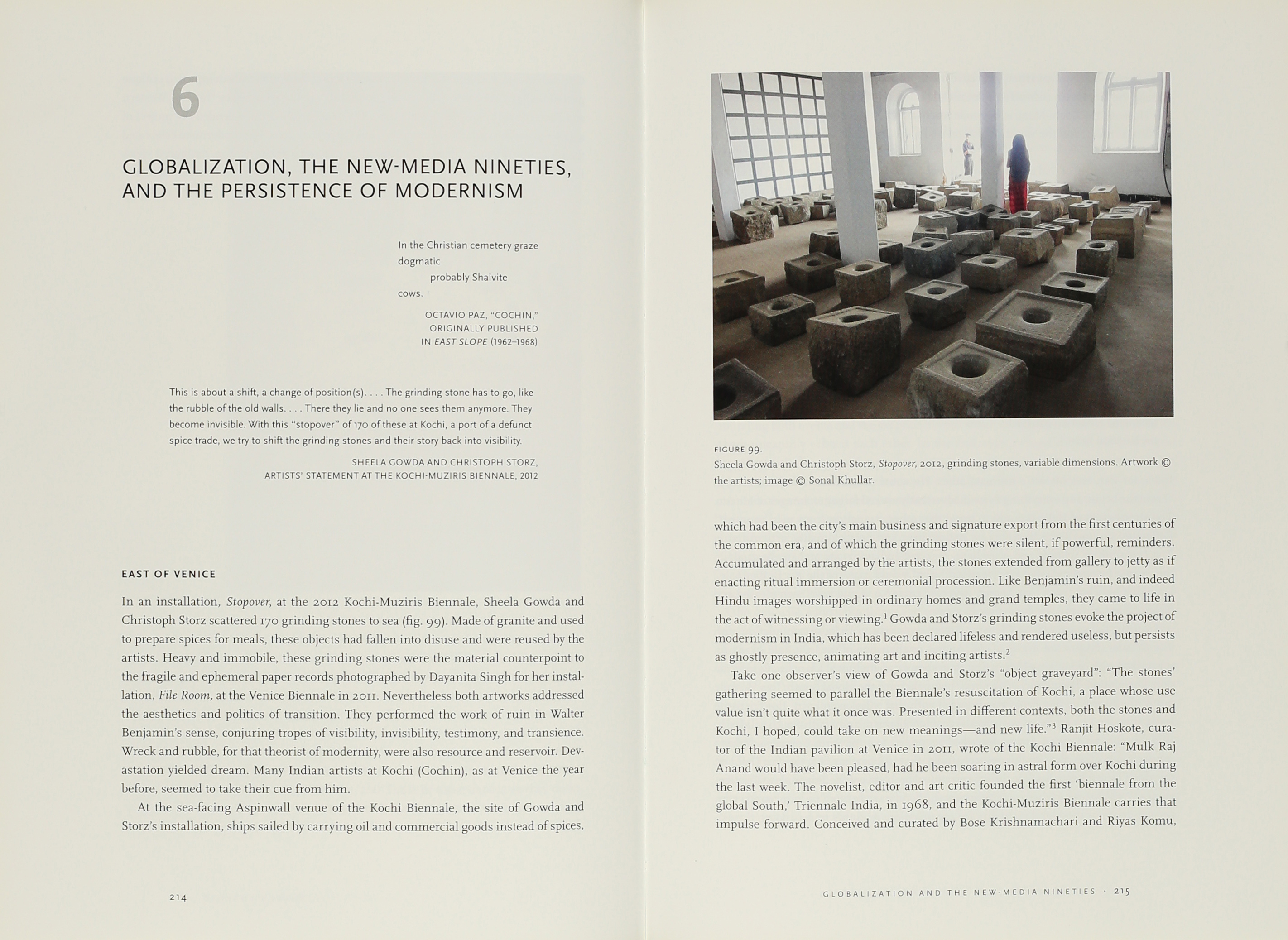 Spread from the book Worldly Affiliations showing an installation of Sheela Gowda and Christoph Storz titled Stopover at the Kochi Biennale, 2012-13

Building on Edward Said’s notion of affiliation as a critical and cultural imperative against empire and nation-state, Worldly Affiliations took up multiple notions of world, worldly, and worldliness. In the 1980s, Said used the word “worldly” in his critique of literary studies, which had turned away from a materialist history, that is, the social and political contexts of the work of art. Another use of “worldly,” as phenomenal and universal, can be traced to the writings of philosopher Martin Heidegger, which were taken up by Gayatri Spivak in the 1980s to articulate a feminist and postcolonial critique of literary studies. Now, in the twenty-first century, the word “worldly” has gained new meaning and force in academic circles: as a cosmopolitan critique of colonialism and capitalism among other things. Tapati Guha-Thakurta, a leading scholar of modern Indian art, smiled when she heard the title of my book, understanding it to be a response to claims of the otherworldliness of Indian art by Abanindranath Tagore and his followers in the Bengal School. That is how Sher-Gil, Husain, Subramanyan, and Khakhar thought of their work. It was a challenge to the Bengal School’s notion of national identity and art as idealising and spiritualising, and a self-conscious turn to materiality, secularity, and the concerns of the present. In the 1930s, Jawaharlal Nehru appreciated Sher-Gil’s work for these qualities, what he called its “turn to life.” 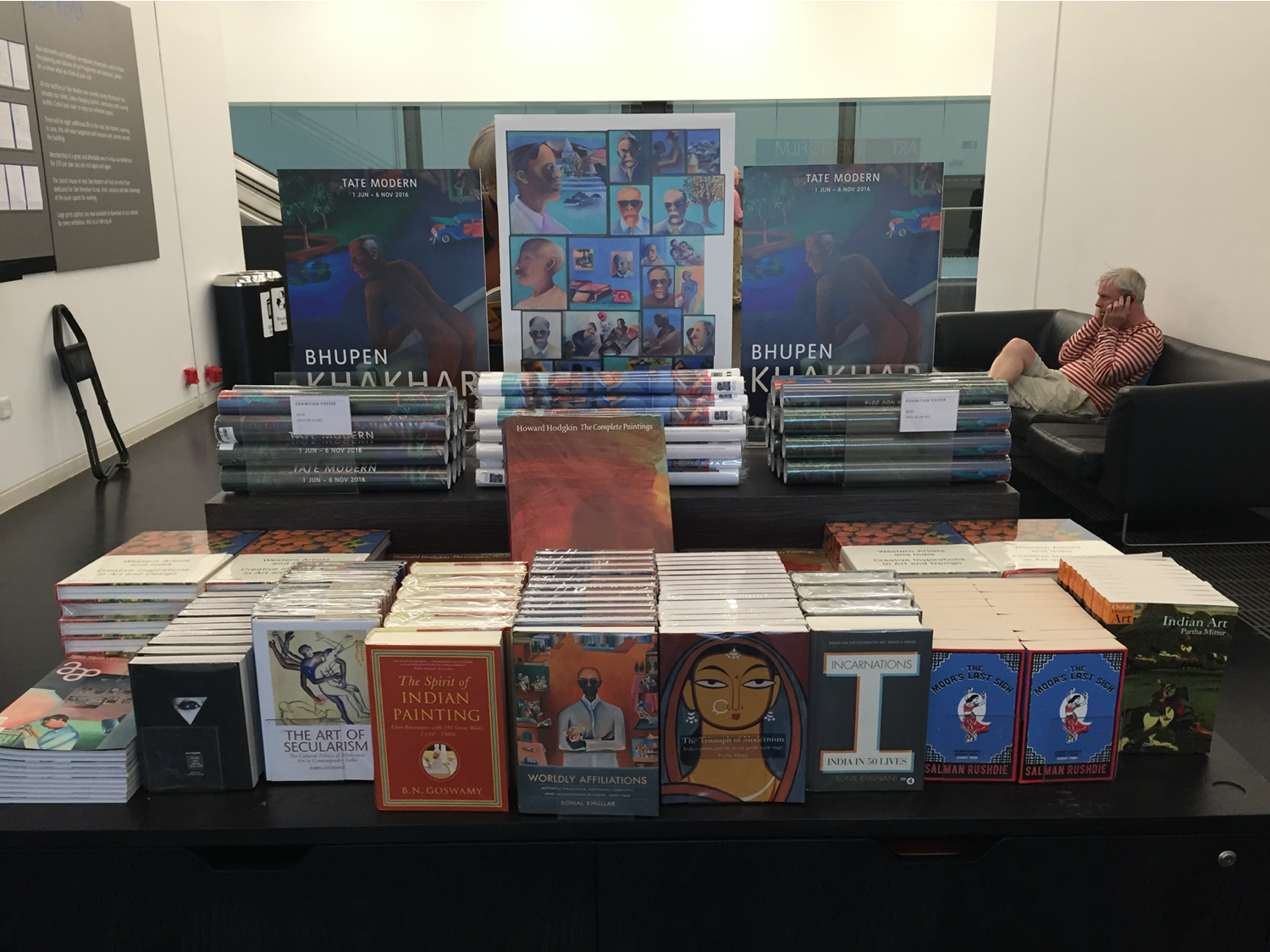 Worldly Affiliations (University of California Press, 2015) by Sonal Khullar on sale at the exhibition Bhupen Khakhar : You Can’t Please All, Tate Modern, 2016

I am completing a book project, The Art of Dislocation: Conflict and Collaboration in Contemporary Art from South Asia, under advance contract with the University of California Press, which analyses how collaboration has emerged as a critical response to globalisation in contemporary art from India, Pakistan, Bangladesh, and Sri Lanka since the 1990s despite growing conflicts between and within nation-states and immense barriers to cultural exchange in the region. I use the region as a conceptual framework to think through globalising processes in the contemporary art world and elucidate a shifting relationship between artistic practices in the global South and North during the twenty-first century.

Identifying ‘dislocation’ as an aesthetic and political strategy and a critical response to displacement (a term scholars have used to characterise South Asian society since the 1990s), this book provides new perspectives on collaborative art, site-specificity, socially engaged practice, and regionalism. It considers art produced for and shown in large-scale international exhibitions and art fairs as well as cotton fields and bamboo rafts, focusing on practices outside the art world centres of Mumbai and Delhi. Many scholars have turned their attention to the art market or biennale system, and to a lesser extent new institutions and infrastructure for art, in South Asia, but there has been relatively little scrutiny of new languages, ideologies, and practices of art. How do artists imagine their role in society? What is the relationship between studio and street? Who is the audience for twenty-first-century art? These are among the questions I explore.

I am also editing a volume From Kitabkhana [Library] to Karkhana [Workshop]: The Arts of the Book in South Asia, under advance contract with the University of Washington Press, which examines textuality, visuality, and materiality in illustrated books from 1100 C.E. to the present. This project arose from my research on contemporary artists’ books in Sri Lanka, the subject of a chapter in The Art of Dislocation. With scholarly essays, creative non-fiction, and original artwork, this volume takes up ontologies, histories, and genealogies of the book in South Asia and its renewal in the contemporary art world. It shows how the book is a living form and practice, arguing against the death of books in a digital age. 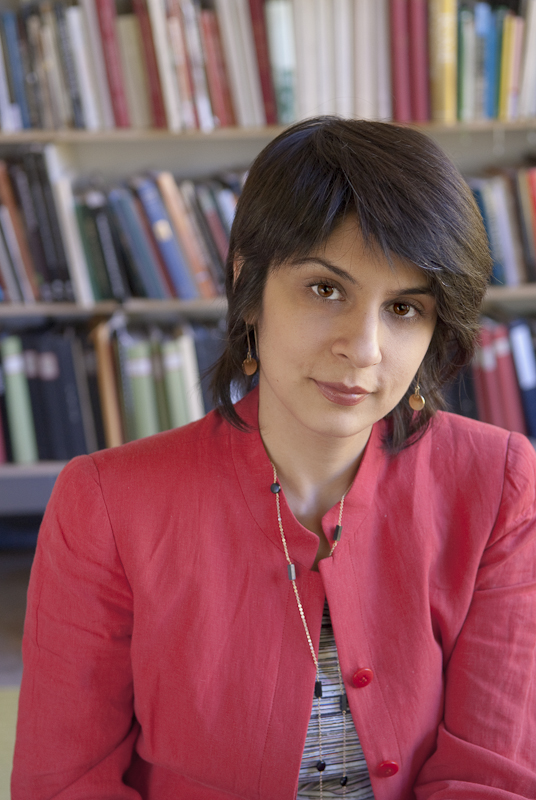 Sonal Khullar specialises in the art of South Asia from the eighteenth century onward. Drawing on scholarship in anthropology, feminist theory, and postcolonial studies, her research and teaching interrogate the global turn in art history rather than taking its significance and implications for granted. She is particularly interested in histories of cosmopolitanism, postcolonial art worlds, art-writing and life-writing, critical historiographies of art, aesthetic theories, feminist geography, the anthropology of art, cross-cultural exchange, and the problem of comparison across areas and periods.