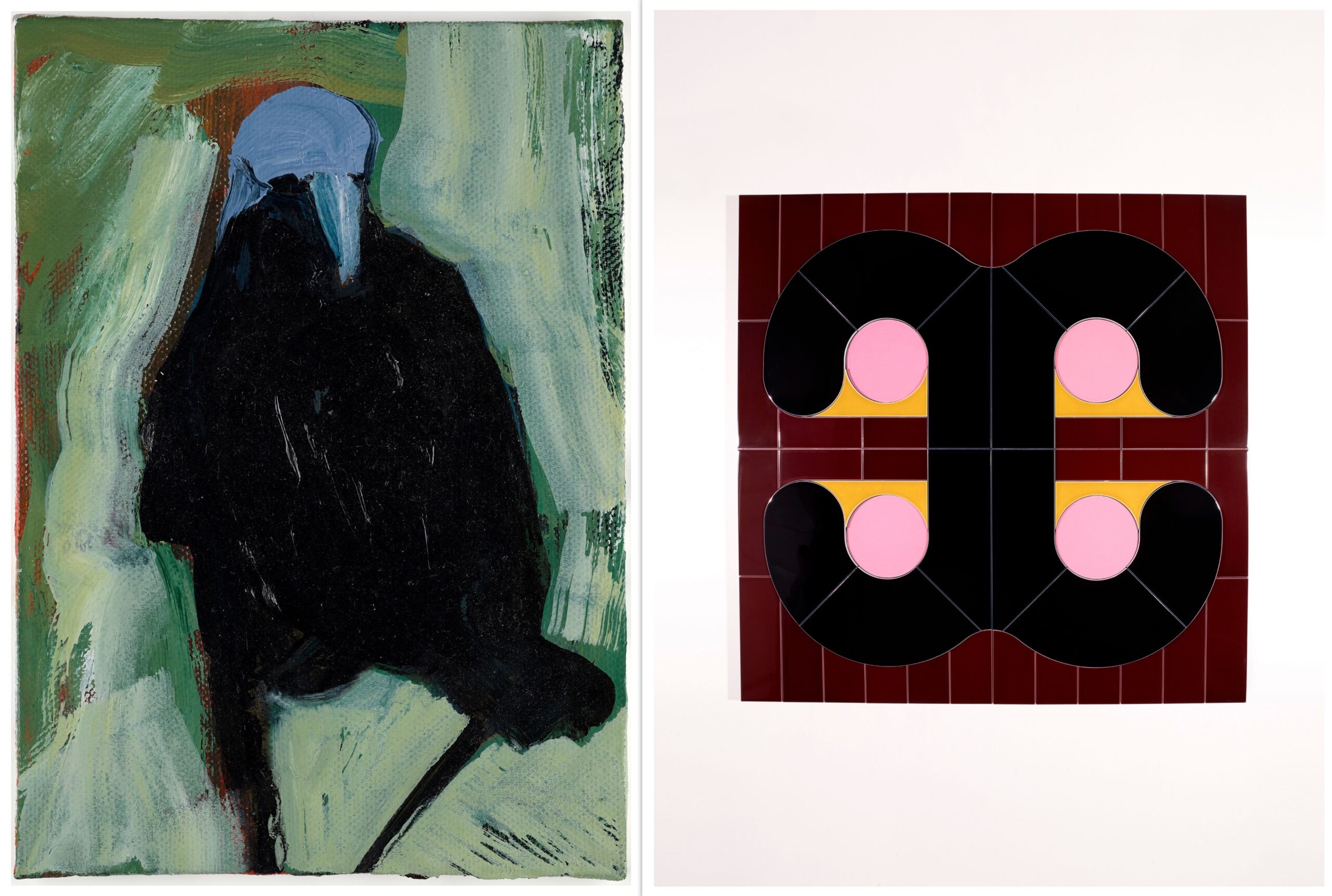 Images relaying on a screen or printed as a photograph act as resources for knowledge and further explorations. As iterated in the last four posts around the broader thematic of diaspora, bodies of work created by artists are forms of storytelling around location that generate pauses in time to consider this fixity. While discussing the wider context of communities outside their so-called ‘places of origin’, the posts hope to consider multiplicities in any consideration of place and belonging.

While Kalpesh Lathigra elaborates on how his ongoing series Nim and Other Stories is about ‘home’, outside the context of nationhood, Chila Kumari Singh Burman embraces her Punjabi-Indian roots to comment further on the dynamics of her situatedness as an artist of colour in Britain. Both Savinder Bual and Shezad Dawood discuss sound and moving images as mediums that translate and transgress visual codes of identity filters.

As the artists have relayed, the notion of nationhood is addressed and then deflected or relocated in a diasporic context, which allows for an exploration of the image as a variable source of engagement –⁠ layered with memory and/or the phantasmic. In this context, the following article examines how the image is amalgamated into other mediums such as paintings and ceramics, and questions the very aspect of realism as a conceptual prism around notions of belongingness.

Lubna Chowdhary’s ceramics and Matthew Krishanu’s paintings reinterpret and re-orient found images through their distinct practices. Personal histories illuminated through the familial and as cultural repositories, enlivened through memorabilia, enable dialogues across thresholds of regionality and help contextualise the practices of the considered artists.

Both Chowdhary and Krishanu spent their early years outside the UK. Their experience of returning to the UK, which they often refer to as home, involved journeying through Bangladesh, India, Pakistan and Tanzania. The implications of an ‘othered’ existence, for them a societal construct, allowed rather for a multicultural engagement and viewing, where identity formulations and the politics of nationality were untethered. With deep roots in South Asian, British and African experiences and histories, the artists hoped to re-centre the viewing of their work in a more international context.

Lubna Chowdhary, born in Dodoma (Tanzania), arrived in the UK with her family in 1970 at the age of five. Her early years in Rochdale, northern England, were annotated with a stark sense of awareness of her South Asian, or specifically, Pakistani lineage. The consciousness now, of growing up as a Muslim in a country that was largely Christian led to a strong sense of community, but also segregation. Her family became support system with a developing bond between Chowdhary and her three other siblings. Her parents who worked for the textile industry in the Greater Machester region were also closely connected with the larger Asian community.

For Matthew Krishanu, who was born in Bradford (UK), his childhood was in Dhaka, Bangladesh. Growing up in the city with a British father and Indian mother, Krishanu realised that calling the UK, India or Bangladesh ‘home’ had to be tempered as several generalisations were easily made – either as a person of colour or one of dual heritage. The way in which Krishanu was viewed made him consider his multi-locational, ‘migratory’ upbringing as an invocatory source with an English father, a Christian priest, and a Bengali mother who ran a women’s theological institution. 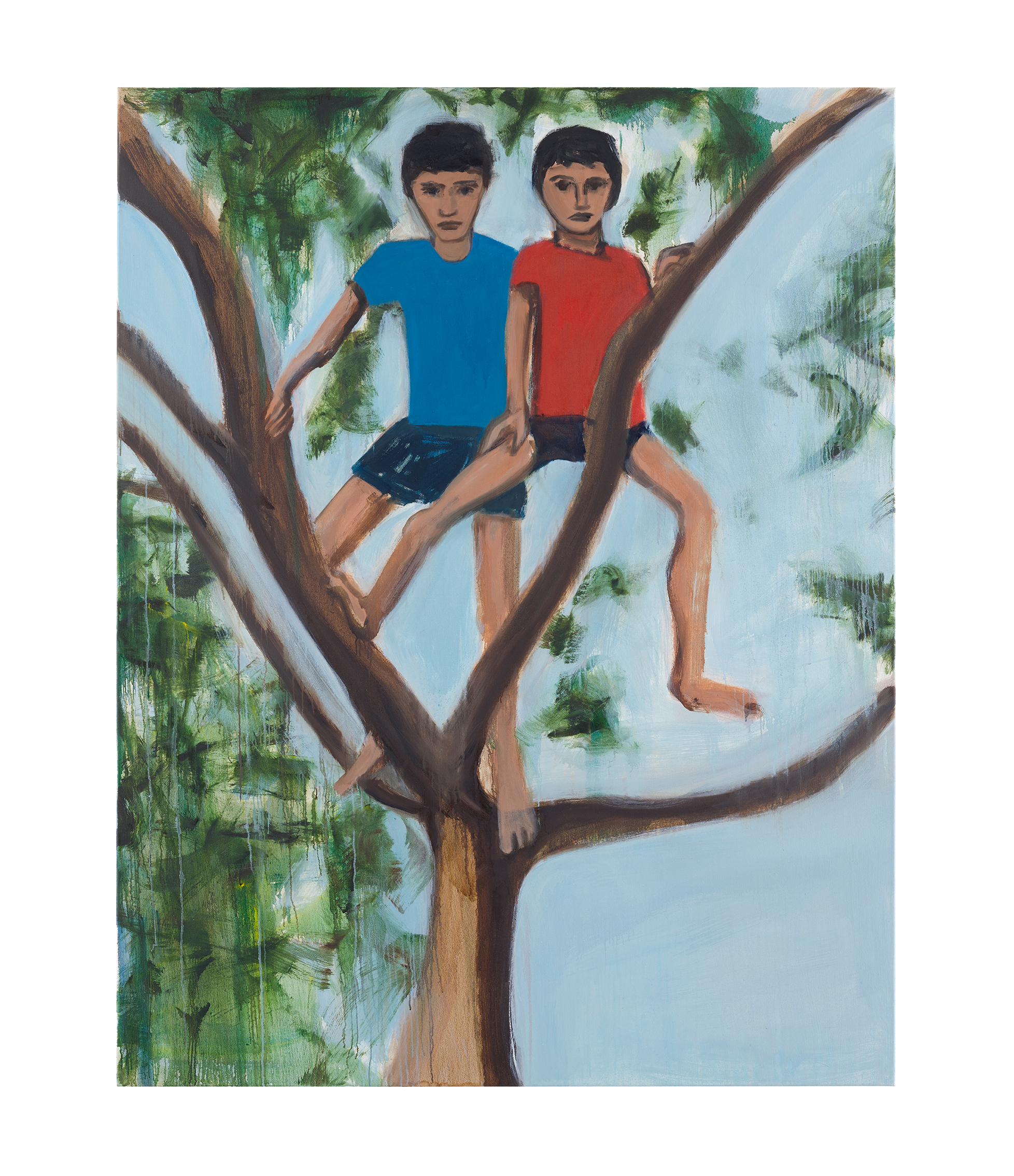 The artist speaks about the importance of his relationship with his older brother. Their growing up experiences seep into many of Krishanu’s paintings. This bond is evident in the series,  Another Country (2012 – 2021), where the artist centralises his brother. For him, this composition marks a shift away from the aesthetics of Western painting where people of colour were usually pushed to the periphery of the frame. In Limbs (2014), for instance, the boys direct their gaze down at the viewer, indicating a reversal. It is an intended shift when compared to art historical paintings. In his Mission series (2012 – 2021), the artist explores his immediate personal connection with his parents, wherein he uses photographs as a reference and strategically deflects any sectarian connotations. And, though his work references the autobiographical, the artist says, “They are about creating paintings that resonate in the world, in terms of people’s perception of art and culture, irrespective of my own personal identities.”

Family photographs, layered with mined, online images of known paintings and found photographs of landscapes comprise visual resonances and allegories for Krishanu’s works. But there are crows too, enabled with a deep symbolism.

After studying Fine Art and English Literature from the University of Exeter (2001) he received a Fine Art Master’s degree from Central Saint Martins, London (2009). Choosing painting over other mediums such as film and photography, Krishanu feels that his images are more akin to diary sketches. The process of editing a picture and a memory to formulate new works leads the artist to create ‘constructed worlds’. For instance, the work titled Golly (2013) is a largely imagined scene derived from a photograph of his brother sitting in a garden, enmeshed with an illusionary seascape. It was only after the artist had completed the painting that he realised how it resonated with an Edward Hopper painting, Rooms by the Sea (1951), a postcard of which was on his door.

On completing a BA Honours from Manchester Metropolitan University (1988), Chowdhary received a Master’s degree in ceramics from the Royal College of Art (RCA), London (1991). She used a travel grant from the RCA to explore South India and its architecture. Compositions – colours and spaces – she encountered during this trip find their way into the formal elements of her ceramic works even today. The landscape of Hampi, as well as temple stone tonalities from Halebid and Belur; the storeyed roofs of the Meenakshi Madurai temple, among others were all sites that the artist photographed and brought back with her as field notes. The black architecture on an arid landscape that Chowdhary experienced during this trip was quite contrary to medieval ruins of England for instance. Over time, as the artist began to reflect on her collected images, she started drawing references from two varied geographical contexts. For her, even ornate elements that adorned the temples were linked to the minimal design of the Lloyd’s building in London.

After the initial struggle of having to respond or react to being a person of colour, Chowdhary pulled away to create works that responded to her interests in history and architecture. She drew from memory as well as photographs to eventually arrive at abstract forms. Fascinated with modernist buildings, as well as new technology, Chowdhary attempts to visually juxtapose ideas with objects – such as the recollection of temples from her travels with a daybed from the Victoria and Albert Museum collection – that translate into a composite of forms, references and even inspirations. 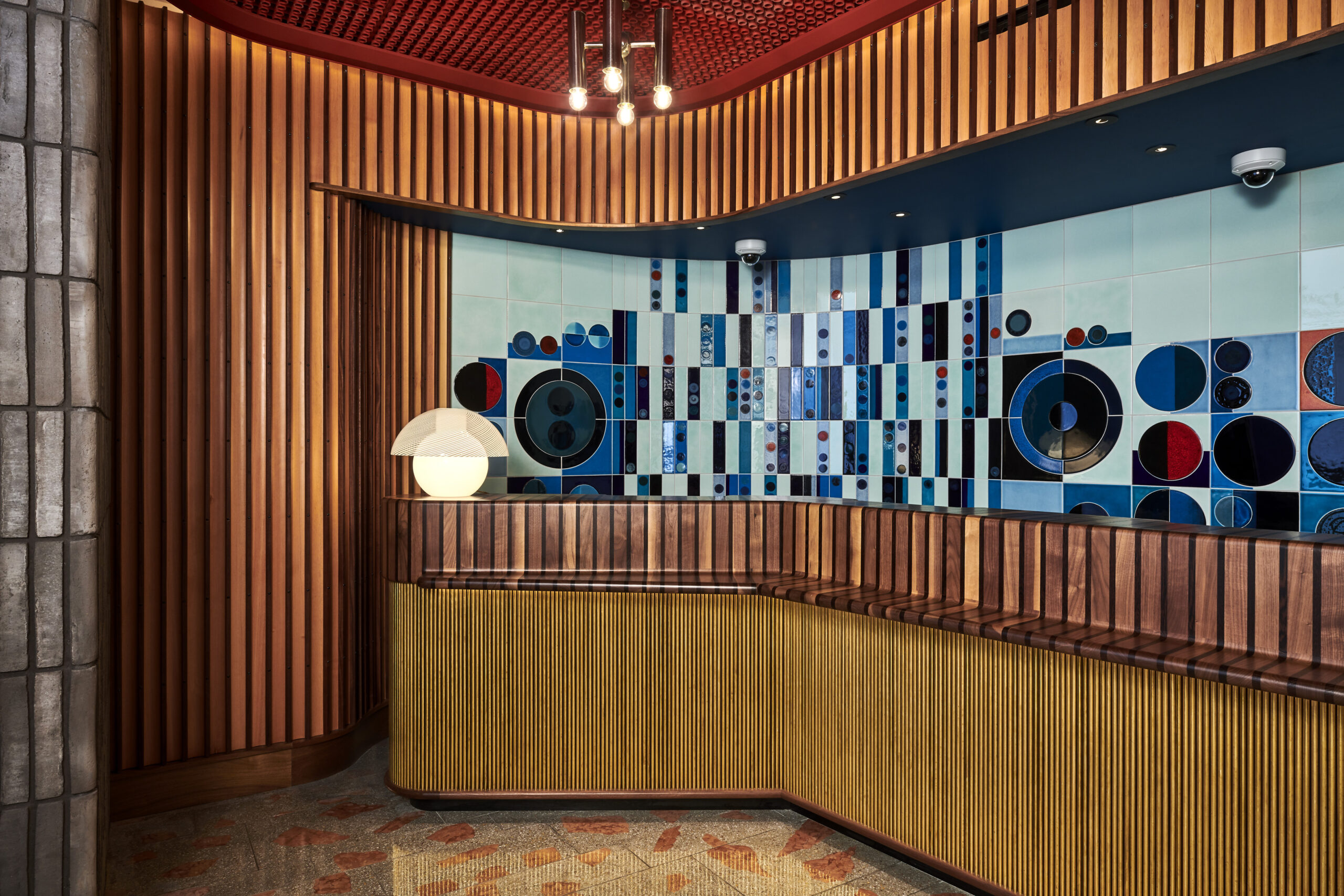 Further, Chowdhary’s spatial understanding of architecture is linked to her early memories from Dodoma and Tanzania that she says were filled with leisure time. The memories that stayed with her, were those of the landscape, flora and fauna, and a very clear visual map of where she lived. In a recent family exercise, Chowdhary was able to locate their home on Google maps  by navigating the streets. The artist recalls a tamarind tree, the Dodoma Hotel, a hospital and a police station. The affinity towards spatial awareness is something that has carried forward in the way Chowdhary creates works that strongly respond to architectural monuments, both in form and colour, as seen in a commission for The Standard Hotel, London (2019).

For both Chowdhary and Krishanu, the visual impact of cultural signifiers – be it connotations of colour, elements of architecture, or rural landscapes – become traces that feed into their storytelling narratives. 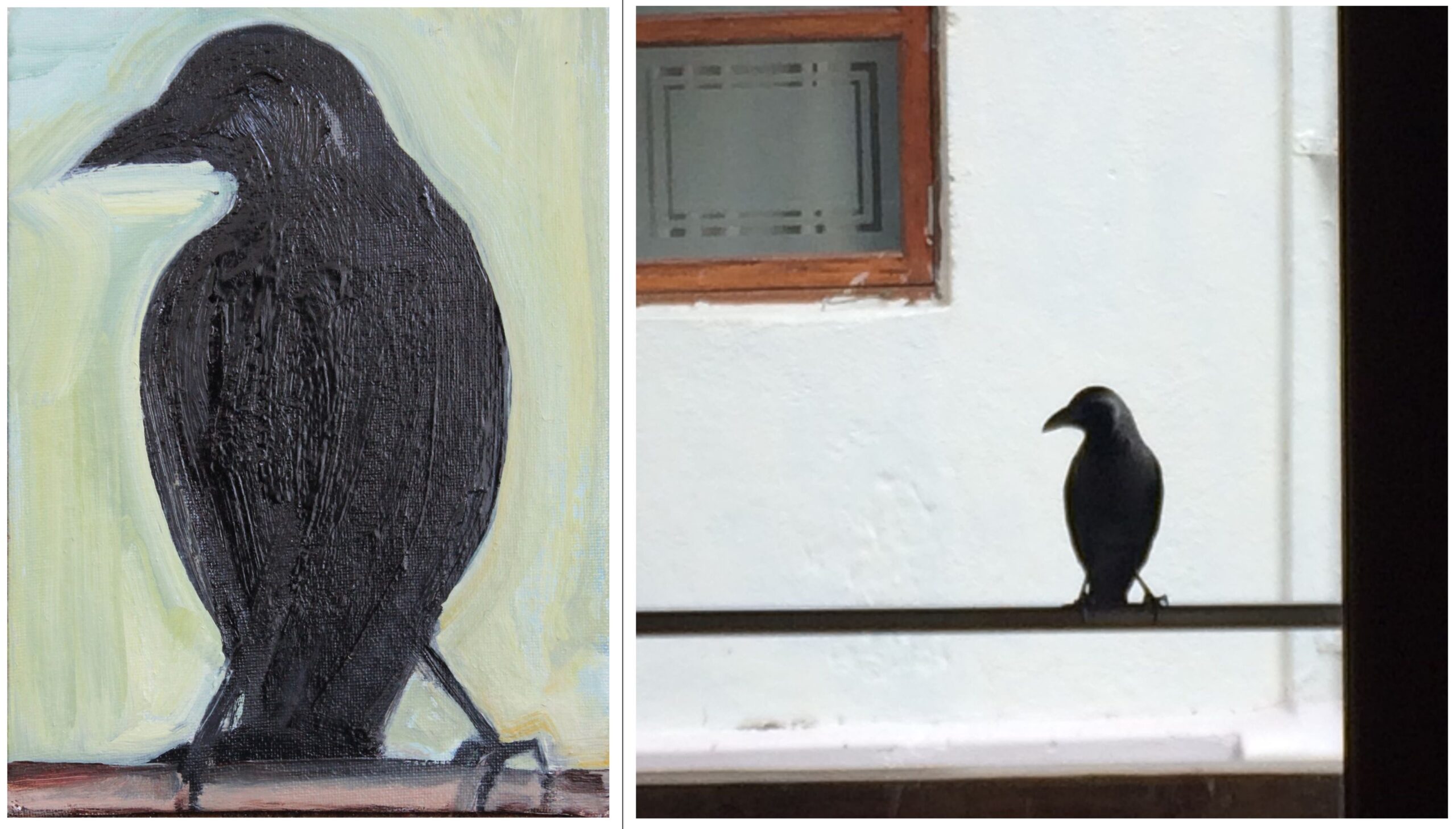 Krishanu is interested in the notion of the viewer ‘entering’ his paintings –⁠ the viewer must become consciously aware of their location in relation to the painting. Similarly with Crow (2012 – 2021), carries forward the artist’s inclusion of nature as a recurrent theme. The notional idea of how people enjoy posing in nature and the unpredictability of the wild and untamed is an aspect that Krishanu draws upon. Boy and Buffalo (2019), Two Boys on a Horse (2018), Skeleton (2014) and even Crows point to this.

Primal spaces have also been inherent in Chowdary’s outlook and practice. Her younger days in the Tanzanian shrublands is a reference point. And yet, her interest in the manner in which spaces are remembered, frames works that respond to architecture or landscape. 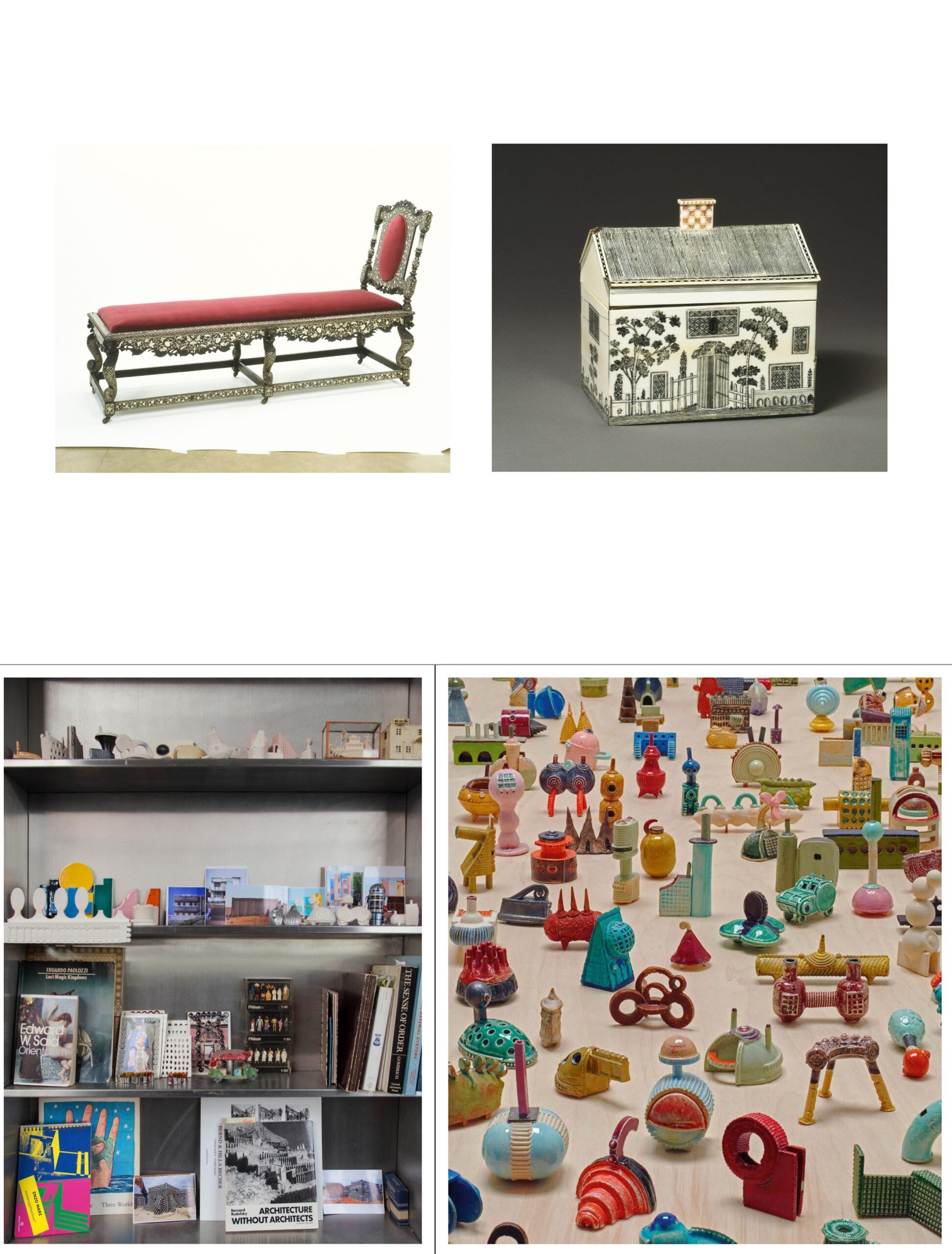 A ceramics residency at the Victoria and Albert Museum(V & A), London (2019) was a benchmark for Chowdhary. It was during this time that she found a way to integrate modernist trajectories and the Bauhaus with anthropological collections of Eastern, or non-European references. These explorations led to revisiting Metropolis (1991), a work that evolves into a thousand handmade objects. Her keenness in technological developments led her to combine colour, tiles, glazes, laser and waterjet cutting, and she began to work with line drawings in a craftsman-like fashion.

These objects, as well as other ‘hybrid artefacts’ seen in the V & A Collection formed a part of Chowdhary’s anthropological research, resulting in artworks like Tableaux (2017). The language of abstraction however is also meant to converge with capitalist and consumerist dimensions of society. In her most recent work, Grey Area (2021), which is devoid of colour, she speaks about travel across time, geographies and space. A quieter and more contemplative work, time becomes an orchestrator of experience, history, image and practice, all of which come to bear on the future of transitioning images. 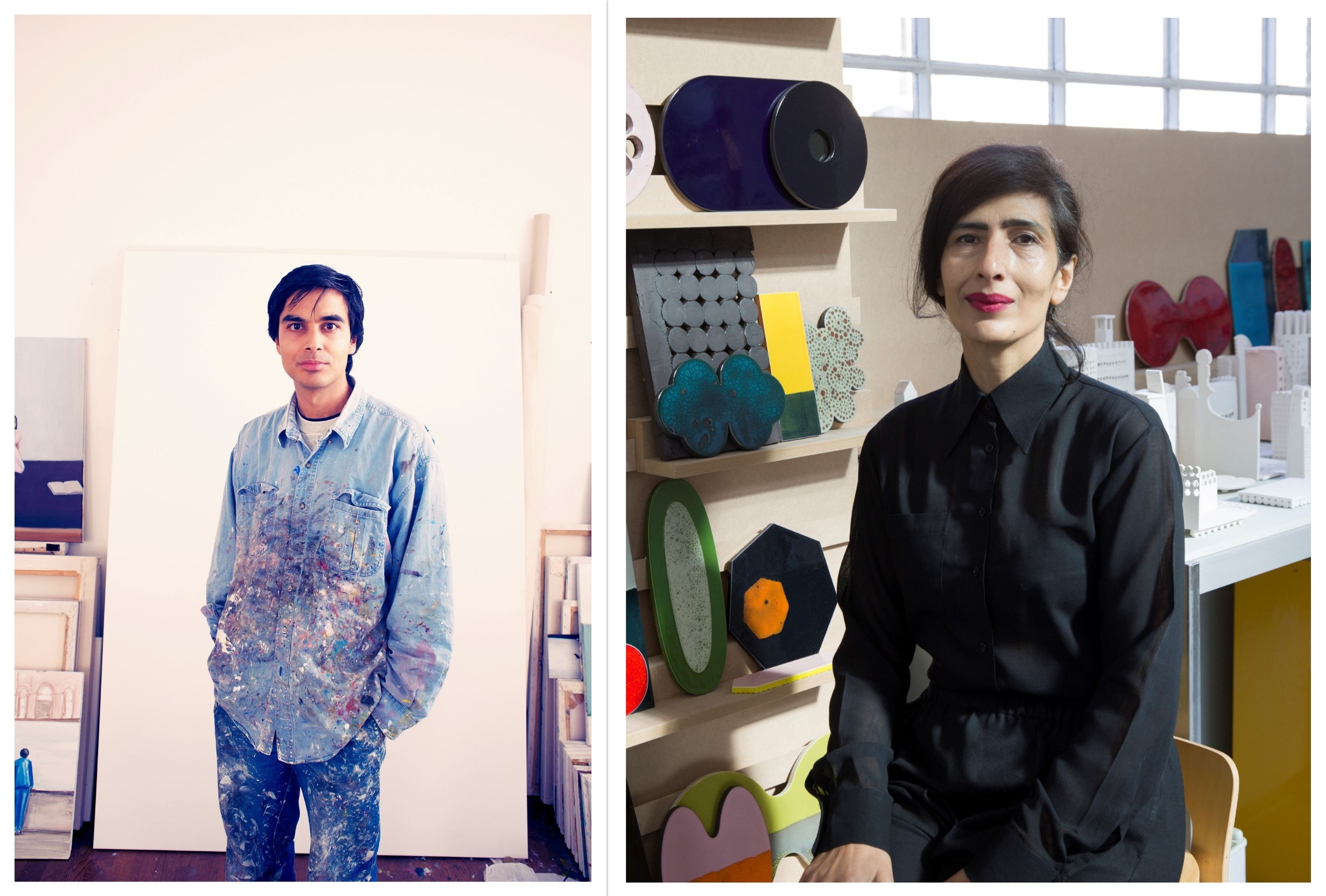 Born in Tanzania, Lubna Chowdhary settled in the north of England in 1970. She has a BA Hons from Manchester Metropolitan University and a Masters degree in Ceramics from the Royal College of Art. She has been shortlisted for the Jerwood Prize in Ceramics and has completed artist residencies at Camden Arts Centre, Victoria and Albert Museum London and IASPIS Stockholm. She lives and works in London.